One big question about a food system is what it costs, not only at the grocery store but also on expenses we can’t readily see—what economists call the “externalized” costs.  These go beyond the production, transportation, processing, and preparation that get factored into what we pay for food.   Instead, they include what the food system does to health, the environment, biodiversity, livelihoods, and the economy itself.

The Rockefeller Foundation has just produced a report addressing the externalized costs of food: True Cost of Food Measuring What Matters to Transform the U.S. Food System.

Consider this: In 2019, American consumers spent an estimated $1.1 trillion on food. That price tag includes the cost of producing, processing, retailing, and wholesaling the food we buy and eat. It does not include the cost of healthcare for the millions who fall ill with diet-related diseases. Nor does $1.1 trillion include the present and future costs of the food system’s contributions to water and air pollution, reduced biodiversity, or greenhouse gas emissions, which cause climate change. Take those costs into account and it becomes clear the true cost of the U.S. food system is at least three times as big—$3.2 trillion per year.

The report identifies 14 areas of externalization and estimates how much each of them contributes to the total cost of food. The big ones are the costs to health and the environment but together all add up to $2.1 trillion—on top of what we pay for food at the grocery store, which already amounts to more than a trillion.

The report breaks down each of these areas.  Here is its estimate of the cost of the food system to health—on its own, $1.1 trillion annually. And here is a recent book on just this topic.  It’s an edited volume of chapters by various authors who take deep dives into specific examples—Egyptian cotton, water in the Andes, Maize, organics, meat, low wages—along with examinations of broader issues of health, the environment, and sustainability. All of this reminds me of yet another book, which I wrote about briefly when it first came out in 2011. 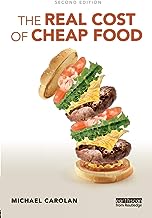 This is an important topic that demands attention.  Cheers to the Rockefeller Foundation for taking it on.