I had no idea scientists were taking CT scans of mummies, and was riveted by a paper in the April 6-12 issue of The Lancet.  The investigators acquired or took CT scans of 137 mummies collected from various museums, the Brooklyn Museum among them (this photo is from the British Museum). 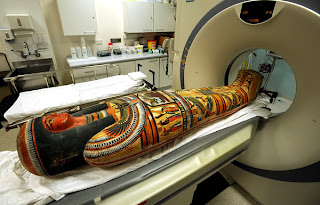 The mummies originated from four different parts of the world.

Atherosclerosis was common in four preindustrial populations including preagricultural hunter-gatherers. Although commonly assumed to be a modern disease, the presence of atherosclerosis in premodern human beings raises the possibility of a more basic predisposition to the disease.

The most fun is the table itemizing details about each of the 137 mummies.  For example, #57 was a male mummy from Egypt, age 40-45, from the Middle Kingdom Dynasty 12, around 1981-1802 BCE, with definite calcifications of the iliac, femoral, popliteal, and tibial arteries.

The authors say that the presence of calcifications in the arteries of four preindustrial populations across a wide span of human history argues that “the disease is an inherent component of human ageing and not characteristic of any specific diet or lifestyle.”

Maybe, but we don’t know whether the calcifications caused the death of these individuals.  The paper assumes that calcifications seen on the CT scans indicate atherosclerosis.  Even if they do, it’s not clear whether or under what circumstances they might lead to coronary heart disease or stroke.

The accompanying editorial doubts that dietary cholesterol and cigarette smoking were responsible for atherosclerosis in antiquity.  Instead, “infection is likely to provide the unifying explanation” (via inflammation).

More research needed!  But this is an entertaining example of the use of modern medical technology to explore interesting questions in human anthropology, physiology, and health.