Food marketing stunt of the week: Lightlife Burgers vs Impossible Foods and Beyond Beef

It’s not enough that the meat industry is attacking plant-based alternative meat products (see my post on how the Zombie Center for Consumer Freedom took on that job).

Now, to my amazement, one brand is attacking another and in a full-page ad in the New York Times, no less. 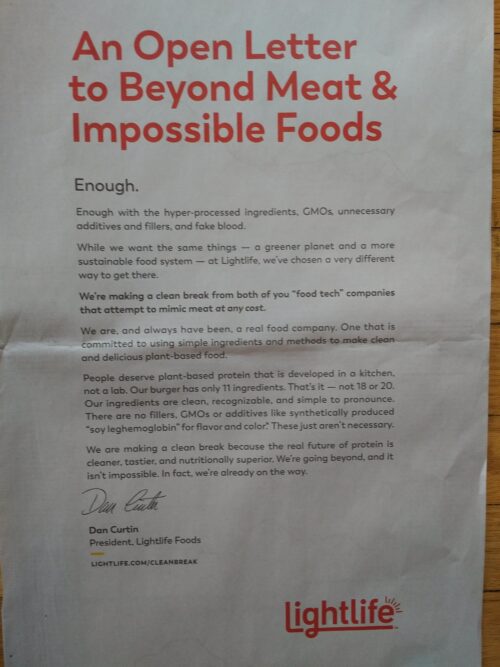 Here’s what it says:

Enough.  Enough with the hyper-processed ingredients, GMOs, unnecessary additives and fillers, and fake blood…People deserve plant-based protein that is developed in a kitchen, not a lab.

Really?  Lightlife burgers taking on Beyond Meat and Impossible Foods?  This so reminds me so much of the sugar industry taking on corn syrup and vice versa.

Does Lightlife have a case?

Food Navigator has a terrific comparison of the ingredients of plant-based burgers.  These are just the ones at issue here (there are more). OK.  Lightlife has fewer ingredients, but it still looks plenty ultraprocessed.  Like the others, it:

I don’t buy that there is a significant difference here.

Impossible Foods calls this ad “cynical and disingenuous.”  It also wrote an open letter of rebuttal.

The campaign leans on spurious arguments typically used by the meat industry: Attack Impossible’s products not based on their indisputable quality, nutrition, wholesomeness or deliciousness, but based on the number of ingredients — a logic-defying concept with zero relevance to health or product quality, intended to distract consumers from the obvious inferiority of Lightlife and Maple Leaf’s products.

Beyond Meat sent a statement to Food Dive

If Lightlife were clear on our ingredients, they would see that our food is made from simple, plant-based ingredients. With no GMOs. No synthetic additives. No carcinogens. No hormones. No antibiotics. No cholesterol. Our foods are designed to have the same taste and texture as animal-based meat, giving more consumers more options that are better for them and the planet.

From my standpoint, the differences between these products are minimal.

The real questions are about the relative benefits of meat versus plant-based alternatives.  A recent review in Frontiers in Sustainable Food Systems addresses those questions.  In my original post, I said “At best, it finds moderate benefits for nutritional vlue, greenhouse gas emissions, and land use, but no to limited benefits for the other measures it evaluated.  It found even less benefit for cell-based meats (which are not yet on the market).”  This, as explained below, misrepresents their findings, which refer only to the state of the research literature. My bottom line?  These products fall in the category of ultraprocessed and are off my dietary radar.  I can hardly believe that attacking each other does any good for them or anyone or anything else.

Brent Kim, one of the authors of this study writes:

We wanted to clear up some confusion that seems to have arisen around one of our tables…Table 1, cited in your post, describes the degree to which those different impacts have been characterized in the literature. “Limited,” for example, indicates that there has been a limited number of studies on the topic. It does not reflect our findings about the relative benefits.

To clarify, here’s what we found:

I stand corrected and reproduce this with Dr. Kim’s permission.  To my bottom line above, I should have added: more research needed!