The hazards of GM foods: patent protection and international relations

Writing in Slate, Fred Kaufman takes a fresh look at the controversies over genetically modified (GM) foods.  Forget the other issues, he says.   Pay attention to patents:

GM foods’ effect on health is uncertain, but their effect on farmers, scientists, and the marketplace is clear. Some GM foods may be healthy, others not; every genetic modification is different. But every GM food becomes dangerous—not to health, but to society—when it can be patented. Right now, the driving force behind the development of new genetic crop modifications is the fact that they possess the potential to be enormously profitable….

That brings me to the GM salmon, in particular AquAdvantage brand engineered to grow faster and bigger than wild salmon. 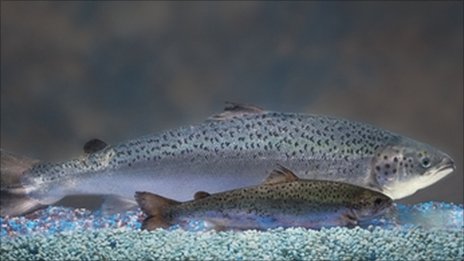 Last Friday (always a good time to release something controversial), the FDA let loose its draft environmental assessment on the GM salmon.  The draft finding of “no effect” is now open for comment.

I find the draft statement remarkable for two reasons.

The FDA had already ruled that the salmon are safe to eat:

With respect to environmental impact, the FDA says:

FDA preliminarily concludes that the development, production, and grow-out of AquAdvantage Salmon under the conditions proposed in the materials submitted by the sponsor in support of an NADA [New Animal Drug Application], and as described in this draft EA [Environmental Assessment], will not result in significant effects on the quality of the human environment in the United States.

AquAdvantage is not intended to be grown in the United States.  It is being raised on Prince Edward Island in Canada and in Panama and will be processed in Panama.

Under the proposed action, AquAdvantage Salmon would not be produced or grown in the United States, or in net pens or cages, and no live fish would be imported for processing.

…As the proposed action would only allow production and grow-out of AquAdvantage Salmon at facilities outside of the United States, the areas of the local surrounding environments that are most likely to be affected by the action lie largely within the sovereign authority of other countries (i.e., Canada and Panama).

Because NEPA [the National Environmental Policy Act] does not require an analysis of environmental effects in foreign sovereign countries, effects on the local environments of Canada and Panama have not been considered and evaluated in this draft EA except insofar as it was necessary to do so in order to determine whether there would be significant effects on the environment of the United States….

If I am getting this right, the FDA is saying that since the salmon is being raised elsewhere, it’s OK to produce it.

This report is generally interpreted as opening the door to marketing of GM salmon within the United States, and soon.

Will it be labeled as such?  I suppose that too is up to Canada and Panama.

All you need is a rutabaga and a dream
The FTC’s latest report on food marketing to kids: glass half full or empty?
Tags: Fish, GM(Genetically Modified)