This book came highly recommended and for good reason.  It is a riveting account by a PhD (anthropology)/MD, now on the faculty of the School of Public Health in Berkeley, who did his dissertation fieldwork as a participant/observer/migrant berry picker.  This meant starting out in Oaxaca, traveling to the U.S. border, crossing it illegally, getting caught, going to jail, getting out, working in the fields with fellow migrants who made it through, and enduring almost everything they had to endure.  The almost?  As an American citizen and white, he was treated better—a difference he makes stark and clear.  For anyone with a conscience, this book is not an easy read; we don’t treat Mexican immigrant workers with much respect and Holmes writes eloquently about how that disrespect feels to people who are making enormous sacrifices to create better lives for their children. What must be done?  “Broad coalitions of people must actively engage in…concrete legal, political, civil, and economic actions…[so these people] no longer have to migrate across a deadly border in order to provide us with fresh fruit in exchange for their broken bodies.”

Fresh Fruit, Broken Bodies is just out but it reminded me of another participant/observer study that first appeared in 2005. 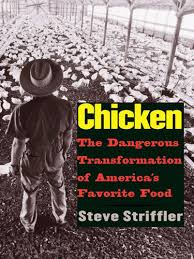 I know about this book because I blurbed it:

An extraordinarily powerful indictment of the U.S. chicken industry.  This book will do for chicken what Fast Food Nation did for beef.

Striffler is an anthropologist now at the University of New Orleans who did his dissertation research working on poultry processing lines.  He lived with the other workers, went with them to their home towns, and experienced what they experienced.   Not easy.  He has much to say about the effect of this kind of work on the people who do it, the communities in which they live, and the impact of industrial animal farming on people, rural America, and the animals themselves.

This is anthropology at its best by courageous people.