Weekend reading: Deer Hunting in Paris (Maine, that is)

Paula Young Lee.  Deer Hunting in Paris: A Memoir of God, Guns, and Game Meat.  How a Preacher’s Daughter Refuses to Get Married, Travels the World, and Learns to Shoot.  Solas House, 2013. 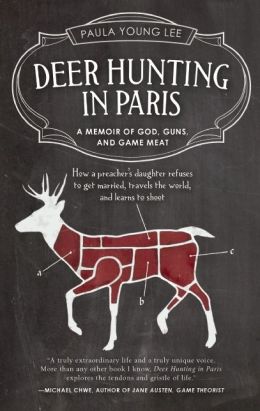 The topic of this cross-cultural memoir—game hunting—would not ordinarily interest me but once I starting flipping through its pages I found myself reading it cover to cover.  For one thing, Paula Lee sounds like someone anyone would enjoy having as a friend. She’s easy to be with as she tells the story of her Korean-American background as a Maine preacher’s daughter, and her partnership with a stuffy but warm-sounding guy in Wellesley, Massachusetts who spends every free moment hunting on his family’s property in Maine.  Paula, a trained chef,* cooks what they shoot.    She also casts an affectionate eye on the backwoods hunting culture.  I can’t say it’s a culture I’d care to adopt (I’m not much for killing animals and Maine winters are cold), but I was fascinated to learn about it from a companion who writes well and tells a good story.

*Addition: Paula informs me that she is not, in fact, a trained chef.  She “just cooks” [I’d say she writes about food like a trained chef].  She says she “started out as an academic historian, migrated into the cultural history of meat via a study of slaughterhouses…and am now mostly a food writer focusing on wild meat.”