I was asked to do a blurb for this book and readily agreed.

Foodtopia gives us a generous overview of Americans’ historic and contemporary involvement in utopian communities through the lens of their dietary beliefs and practices.  From Thoreau’s Walden to Penniman’s Soul Fire Farm, the search for agrarian values and food justice should inspire us to support—and join—these movements.

If you don’t know the history of  back-to-the-land movements, this is a great place to begin.

This book was especially interesting to me because I know some of the players and reading it told me a lot about their backgrounds and accomplishments.  It deals with several New York City-based organizations, among them United Bronx Parents, the Park Slope Food Coop, God’s Love We Deliver, and, most prominently, the Community Food Resource Center. 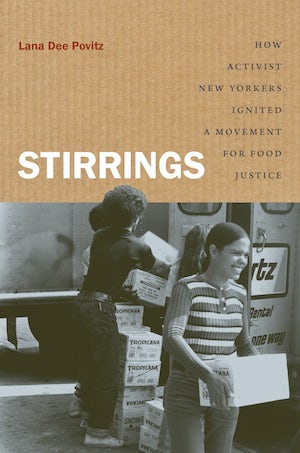 I wrote a blurb for this one.

Stirrings uses the political history of food advocacy organizations in New York City to explain why such groups focus almost exclusively on feeding hungry people rather than on addressing the root cause of that hunger–poverty.  The lessons taught by this history make this book essential reading for anyone interested in ending hunger in America.

And here is a brief paragraph from the Introduction (p. 7):

Aside from its material value as a commodity essential to human life, food acts as a lens through which we can understand dominant social values.  How and by whom food is produced, which foods are government-subsidized, who is deemed eligible for food assistance, who becomes the gatekeepers for providing that food—such arrangements speak volumes about who and what is prioritized, especially by those with decision-making power.  By extension, the history of food activism is important because it tracks how these priorities might be rearranged, how people can work to challenge or temporarily overturn established hierarchies, especially of class and race.  Just as often, the history of food activism sheds light on how inequalities and hierarchies are preserved, defended, and even extended. Early in March, I put out a call for information about agriculture, food, or nutrition coalitions working toward improving the food system in one way or another.

I did this because I think that if the thousands of organizations working on food issues are to gain real political power, they will need to unite around common goals.  Coalitions are a good way to begin.

So many responses came in that I recruited an NYU undergraduate student, Jennie Dockser, to put them in some kind of order, collect missing information, and try to make sense of them.

I did some editing of what she gave me, but here is a list of the coalitions I now know about.  Take a look.

Perhaps your organization can join?

This book is about how to turn the “eat-better” food movement into a movement for social justice.  It directly addresses the complaint that the food movement has no real power.

Sbicca, a sociologist at Colorado State, bases his analysis on three case studies of food justice activism focused on creating reasonably paid work for former prisoners and low-wage workers, many of them of color or immigrants.

He tells the stories of three programs, Planting Justice in Oakland, California; the San Diego Roots Sustainable Food Project; and programs run by the United Food and Commercial Workers Local 770.

In writing this book, he investigates

the tensions between maintaining an “us” in the food movement and a “them” needed to keep the food system running.  This informs the prospects of a food politics that is capable of overcoming ethnoracial and citizenship boundaries…The ethnoracial and class makeup of food workers pushes labor organizers to challenge the race-to-the-bottom practices of food corporations.

He ends the book by calling for what is needed to create true food justice: land, labor, community development, health, self-determination, and environmental sustainability—exactly what is called for in food system reform.

This is an academic book but well worth reading for anyone who cares about building a movement with power to change food systems. As should be obvious from this cover, I have a special interest in this book.  For more than 20 years, I’ve been attending an annual meeting of food industry executives, entrepreneurs, and a sprinkling of advocates, government officials, and academics brought together by its author, Ray Goldberg, to try to encourage mutual understanding if not agreement.

When the meeting started, Ray was an agribusiness professor at the Harvard Business School.  After his retirement, the meeting moved to the Kennedy School of Government.  It still continues.

This book consists of Ray’s interviews with dozens of people who have attended this meeting over the years.  Ray interviewed people with an enormous range of involvement in food as well as of opinion about what should be done to improve food systems.

If truth be told, I always felt like a spectator at this meeting, and I am enormously surprised and honored to see that my interview comes first in the book, and that Ray mentions it in his introduction and conclusion.

I think the book is worth reading.  Or, as it happens, watching.

Oxford has posted the videotaped interviews online.  Here’s mine.

Weekend reading: Politics of the Pantry

Who knew that American housewives were up in arms throughout the last century about rising food prices and misleading package information.  Twarog traces the history of how these movements developed, their connections to unions and women’s auxiliaries, and how twentieth-century politics systematically destroyed them.  Her book has much to teach us about what’s needed to preserve—and strengthen–today’s food movements.

Today is this blog’s tenth anniversary!

I can hardly believe that I have been writing this blog for ten yers, but this is indeed the tenth anniversary of its official beginning.  I will be writing about the blog this week, reflecting on its origins and why I keep doing it.

In the meantime, have a thoughtful and generous Memorial Day!