Some musings on non-GMO Cheerios to start the week

I read about General Mills’s introduction of non-GMO Cheerios back in January, but didn’t get around to looking for them until this weekend.

I was expecting to see something like this (thanks Fooducate): 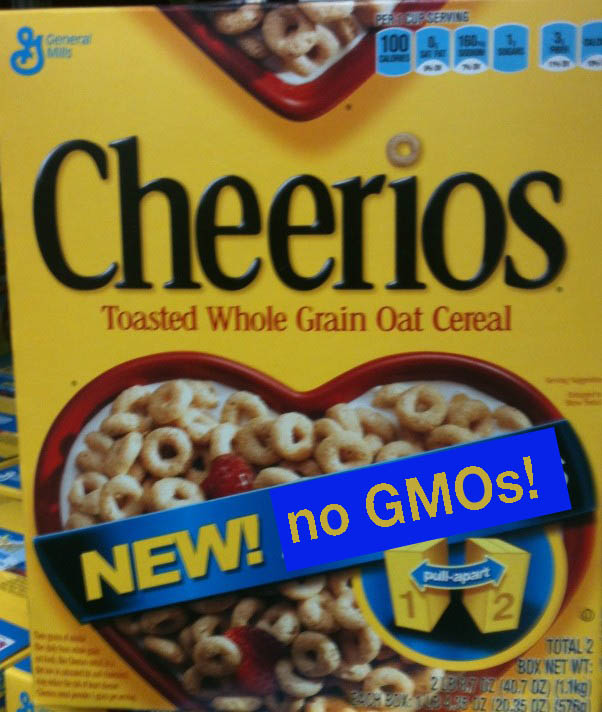 Instead, the information is tucked into a side panel. This may explain why General Mills is complaining that the non-GMO is not doing a thing to boost sales of Cheerios.  If anything, sales are “down somewhat.”

And here’s a good one: According to one professor, the non-GMO Grape Nuts and Cheerios are going to be less nutritious than the GMO versions.

How come?  It’s hard to find non-GMO vitamins (who knew?).  Vitamins, it seems are often produced from genetically engineered microorganisms, or from microbes growing in fermentation tanks that are fed a nutrient mix that contains ingredients from GM sugar beets or corn.

Should we be worried about nutritional deprivation among Cheerios eaters?

Everything else is added vitamins.

Personally, I prefer my cereals with no added vitamins (they taste bad).  And I doubt they make much difference to health.

Whether non-GMO will have a noticeable effect on sales of Cheerios remains to be seen.

Food Navigator just did a report on cereal “blockbusters,” the top best-selling brands.

Numbers like these are so hard to come by that they inspired me to make a table.

I looked up some figures on advertising expenditures for specific cereals from Advertising Age, 100 leading advertisers (June 24, 2013).

*All numbers rounded off.  **All forms of Cheerios: $167 million

Think about what that money could do if used to promote public health. It’s the (relatively) quiet season and I’m getting caught up on reports coming in.   Here are two.

1.  The Bipartisan Policy Center, a group founded by former cabinet secretaries, has come up with a plan to improve the health of Americans: Lots to Lose: How America’s Health and Obesity Crisis Threatens our Economic Future.   The Executive Summary is online, but the website is difficult to navigate and you have to log into Facebook to read the entire report.

The report calls on the public and private sectors to collaborate in creating healthy families, schools, workplaces and communities. Some of the recommendations are aimed at the food environment, rather than individuals, which is good.  And they are addressed to families, schools, workplaces, communities, and farm policy.  But like most such reports this one does not explain how any of its recommendations might be achieved.

2.  The Rudd Center at Yale has produced Cereal Facts, a study showing that cereal companies:

Increased media spending on child-targeted cereals by 34% from 2008 to 2011, mainly on the least nutritious products.

I love cereal boxes, especially ones with egregious health claims, and I have a small collection dating back ten years or so.  I also, courtesy of Kellogg, have facsimiles of the complete set of Rice Krispies, All-Bran, and Froot Loops, dating back to the first year they were produced.   So I’m delighted to find this history of U.S. breakfast cereals, organized alphabetically by era starting in the 1860s, illustrated with pictures of each.  A encyclopedic nostalgia trip!

Bobrow-Strain organizes this books by dream categories: dreams of purity and contagion, control and abundance, health and discipline, strength and defense, peace and security, resistance and status.  White bread does all this?  Indeed it does in this story of how “white bread became white trash.”  He begins by asking, “Is this stuff even food?”  He ends with the whole wheat phenomenon and “yuppie bread.”  This is entertaining history and an example of food studies in action: using food to talk about important issues in history and contemporary society.

Keeping up with the cereal news

Sugary breakfast cereals are a hard cell these days, and marketers are getting increasingly creative.

Item: The Cornucopia Institute’s investigative report on “Natural” cereals warns consumers that “natural”—a term with no regulatory meaning—is marketing hype.  “Natural” is not the same as Organic.  “Natural” cereals have all kinds of things not allowed in Organic cereals.  It’s best not to confuse them.

The company’s claim of “More Whole Grain Than Any Other Ingredient*” comes with an asterisk.  This goes to the disclaimer “*as compared to any other single ingredient.”

PHAI suggests taking a look at the General Mills’ web page about sugar.  This says that “Ready-to-eat cereals account for a relatively small amount of a child’s daily sugar intake.”

From a calorie and nutrient standpoint, are both products a good breakfast choice?

The answer:  “Yes, they are. In fact, all General Mills cereals are lower calorie, nutrient dense choices.

From a calorie and nutrient standpoint, are both products a good breakfast choice?

Yes, they are. In fact, all General Mills cereals are lower calorie, nutrient dense choices.

From the standpoint of nutritionism (judging a product by its nutrient content), Cheerios is a better-for-you choice.

But both are highly processed cereals, thereby raising that same old philosophical question: is a somewhat better-for-you processed food necessarily a good choice?

A good question to ponder as you wander down the cereal aisle.

EWG says kids’ cereals have too much sugar

The Environmental Working Group (EWG) is getting interested in childhood obesity.  It released a report on sugars in kids’ breakfast cereals.

Michele Simon’s analysis of the report notes that these levels don’t even meet Kellogg’s commitment to responsible marketing, a pledge to “apply science-based Kellogg Global Nutrient Criteria to all products currently marketed to children.”

I’ve been reading reports like this since the 1970s when Center for Science in the Public Interest published them at regular intervals.  Not much has changed.

Courtesy of Kellogg, I have a collection of copies of Froot Loop boxes dating back to the year in which this cereal was first introduced.  I thought it would be interesting to check the sugar content.

In 2005, Kellogg tried a version with 1/3 the sugar—10 grams—but it didn’t sell and quickly disappeared.

Companies are trying to reduce the sugars by a little, but this seems to be the best they can do.  It’s not enough.

As the EWG press release explains, some cereals are better than others.   It notes that I recommend:

Once again, kids prefer foods in packages with cartoons

Yet another study confirms the obvious: kids prefer foods with cartoons on the package. Why should this be obvious?  Why else would the cartoons be there if not to sell products to kids?

The latest study comes from the Archives of Pediatrics and Adolescent Medicine.

It says pretty much the same thing as the study published in Pediatrics last year by investigators from the Yale Rudd Center.

The newer study did something cute. It invented a cereal box and tested kids’ responses to it and variations with and without cartoons of the penguins Mumble and Gloria from the movie Happy Feet . This is why is would be a good idea to just say no to cartoons on food packages aimed at kids.