Two articles on similar themes have come out recently.

Is It Time to Break Up Big Ag? — The New Yorker

Nationally, the four largest dairy co-ops now control more than fifty per cent of the market. They’ve been able to grow so big, in part, because of a 1922 law called the Capper-Volstead Act, which provides significant exemptions from antitrust laws for farmer-owned agricultural coöperatives. “The agricultural industry is different than other industries because Capper-Volstead allows them to combine in ways that other individuals would go to jail for,” Allee A. Ramadhan, a former Justice Department antitrust attorney who led an investigation into the dairy industry, told me.

The law’s protections were intended to give small, independent farmers the right to collectively bargain prices for processing and selling their goods, but many large co-ops, such as D.F.A., have increasingly come to resemble corporations.

Most chicken that Americans eat is processed by a handful of big companies because, in recent decades, the government gave its blessing to the consolidation of poultry processing, along with a wide range of other industries. The unsurprising result: In recent years, the surviving companies took advantage of their market power to prop up the price of chicken, overcharging Americans by as much as 30 percent.

Evidence of the industry’s misconduct became so blatant — thanks in part to lawsuits filed by wholesale poultry buyers — that regulators were roused from complacency. Beginning in 2019, the government has filed a series of charges against the companies and their executives.

And while we are at it, let’s not forget Philip Howard’s work, which I’ve written about previously. The White House issued a fact sheet on promoting competition in several business areas, one of them agriculture.

Over the past few decades, key agricultural markets have become more concentrated and less competitive. The markets for seeds, equipment, feed, and fertilizer are now dominated by just a few large companies, meaning family farmers and ranchers now have to pay more for these inputs. For example, just four companies control most of the world’s seeds, and corn seed prices have gone up as much as 30% annually. Consolidation also limits farmers’ and ranchers’ options for selling their products. That means they get less when they sell their produce and meat—even as prices rise at the grocery store…Overall, farmers’ and ranchers’ share of each dollar spent on food has been declining for decades. In short, family farmers and ranchers are getting less, consumers are paying more, and the big conglomerates in the middle are taking the difference.

In the Order, the President:

The rules seek to make it easier for the agency to challenge unfair and deceptive practices by meat processors and would allow farmers to more easily file complaints with USDA or sue under the Packers and Stockyards Act. People familiar with the order said it would also tighten the rules for so-called poultry grower tournament systems, in which contract farmers are paid more or less than their peers in the same area depending on how closely they meet buyers’ standards.

The agency is also moving forward with rules that seek to increase food access through alternatives to supermarkets, like local farmer’s markets, and increase consumer transparency about where meat is raised.

Lest anyone think these are trivial measures, take a look at the reactions.

President Biden’s executive order calling for USDA to change the Packers and Stockyards rules will have unintended consequences for consumers and producers…Government intervention in the market will increase the cost of food for consumers at a time when many are still suffering from the economic consequences of the pandemic. These proposed changes will open the floodgates for litigation that will ultimately limit livestock producers’ ability to market their livestock as they choose. These proposals have been considered and rejected before and they are counter to the precedent set in eight federal appellate circuits.

Zephyr Teachout in The Nation:

He ordered the Department of Agriculture to use its full power under the Packer and Stockyards Act to break the stranglehold of distributors and other corporate giants that crush farmers and farmworkers…Biden has a chance to be the first trust-busting presidency in over 50 years—and we keep getting strong signals that he’s got it in his sights. That’s great news for workers, for small businesses, and for the small communities that have been left out in the collapsing concentration of our country for the last 50 years.

Secretary Tom Vilsack said USDA will offer $500 million in grants, loans, and other assistance to help new meat and poultry processors enter the market, along with $150 million to support small plants that are already operating. The department will also move forward with a series of regulations to protect farmers and ranchers who work with large agribusinesses.

NSAC is also pleased to see that USDA will issue new rules under the Packers and Stockyards Act. As directed in the Executive Order, this new rule will make it easier for farmers to bring and win claims, stopping chicken processors from exploiting and underpaying chicken farmers, and adopting anti-retaliation protections for farmers who speak out about bad practices.

Will Biden’s USDA follow through?  That would be real progress.

I’ve been collecting predictions of what’s going to happen to the food industry this year.  Here are some, about cooking, sales, products, flavors, regulations, e-sales, robotics, and agriculture.

David Michaels.  The Triumph of Doubt: Dark Money and the Science of Deception.  Oxford University Press, 2019. 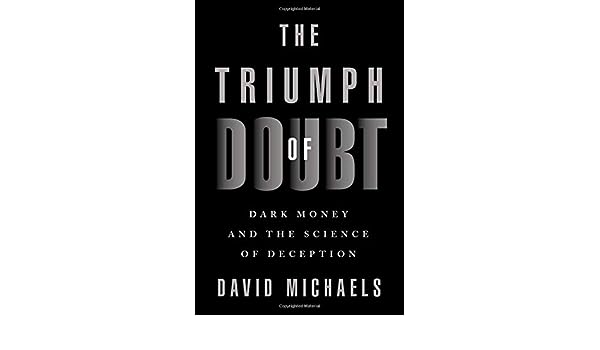 Even though this book is not strictly about food politics, it has enough about the sugar and alcohol industries to qualify.  I did a blurb for it.

Triumph of Doubt is an industry-by-industry account of how corporations manipulate science and scientists to promote profits, not public health.  Nothing less than democracy is at stake here, and we all should be responding right away to David Michaels’ call for action.

He’s got some ideas about what to do—keep conflicted scientists out of policy making, for example—but in this political environment?

That leaves it up to us folks to take to the streets.  If only. And happy thinking.  Check out Senator Elizabeth Warren’s speech on industry consolidation and concentration, including what is happening in the food industry.

Competition in America is essential to liberty in America, but the markets that have given us so much will become corrupt and die if we do not keep the spirit of competition strong. America is a country where everyone should have a fighting chance to succeed—and that happens only when we demand it.

The Agriculture Department has a role to play in making sure that poultry farmers and produce growers aren’t held hostage to the whims of giant firms.

Case study on why regulation matters: salt reduction in the UK

Thanks to Courtney Scott, a doctoral student at University of North Carolina, for sending me this account of the fate of Britain’s salt reduction strategies, published in the BMJ (British Medical Journal).

The lead author on the article is Dr. Graham MacGregor, Britain’s leading advocate for diets lower in salt.  It is about the derailing of Britain’s remarkable successful salt reduction strategy.

Under the auspices of Britain’s Food Standards Agency (FSA), the salt reduction program initiated in the early 2000s—getting companies to slowly but steadily reduce the salt in their products—was working well.

Most impressive: salt intake, blood pressure, heart disease, and stroke declined in parallel with the decline in salt in the food supply.

But in 2010, Britain elected a more conservative government.

Andrew Lansley was appointed secretary of state for health, and he moved the responsibility for nutrition from the FSA to the Department of Health. This disrupted the salt reduction programme, making it unclear who would be responsible for the policy. In 2011 Lansley launched the responsibility deal, whereby he made the alcohol and food industries responsible for reducing alcohol consumption and improving nutrition, respectively. As a result, salt reduction lost momentum.

The key points of the article:

As I’ve explained previously, most salt—80% or more—in American diets is already in processed and prepared foods when they are presented to us.  That’s where the salt reduction has to come from.  As the authors explain,

Members of the food industry have said that they are keen to reformulate their foods to make them healthier. All they require is to be on a “level playing field” with the other major companies, so that they can make their foods healthier in a structured, incremental way. They need to be assured that there are proper reporting mechanisms in place and that all of the companies are being monitored equally. Enforcement is required, and if it doesn’t work, regulation or legislation must be enacted.

The debates over salt may be the most contentious in the field of nutrition (as the Washington Post puts it), but the parallels between the British decline in salt intake and in salt-related disease are impressive.

On a population basis, eating less salt is healthier.

This is something you can’t easily do on your own.  The food industry has to do it.  And food companies don’t want to, for obvious reasons.

Hence: the need for regulation.

Why regulate? Because it works.

In it, I review how researchers like Taber et al are demonstrating how regulations aimed at changing the environment of food choice seem to be helping children and adults eat more healthfully.

That is why regulation is worth consideration.

The food industry cannot make significant changes on its own.  Food companies are beholden to stockholders and returns to investors.

We can’t count on consumer demand.  It’s up against the billions of dollars spent on food marketing, advertising, and lobbying.

Studies like this one are beginning to show positive results.

If you take junk food and sodas out of schools, kids don’t eat as much of them and are healthier.  If you have strict nutrition standards for school food, the food is healthier and so are the kids.

This may all seem self-evident, but now we have research to prove it.

Government agencies should pay close attention and figure out everything they can do to make the food environment healthier for children and adults.

I’m also catching up on reading.

Wenonah Hauter.  Foodopoly: The Battle Over the Future of Food and Farming in America.  The New Press, 2012.

Hauter heads up Food and Water Watch, a tough-minded advocacy group in Washington DC working to preserve and ensure a safe, accessible, and sustainable food supply.  Foodpoly is her manifesto.  She has a lot to say about the problems with food policy, food chains, the organic-industrial complex, the food safety system, factory farms, and corporate control of the food supply.  She urges: “eat and act your politics.”  I’m using it as required reading in my food advocacy course this spring at NYU.

And here are a couple of others I’ve been saving up:

Bee Wilson, Consider the Fork: A History of How We Cook and Eat, Basic Books, 2012.

I blurbed this one:

Consider the Fork is a terrific delve into the history and modern use of kitchen tools so familiar that we take them for granted and never give them a thought.  Bee Wilson places kitchen gadgets in their rich cultural context.  I, for one, will never think about spoons, measuring cupts, eggbeaters, or chopsticks in the same way again.

I blurbed this one too:

Permit But Discourage is an engagingly written examination of a hugely important question: How can laws best be used to protect individuals and societies against out-of-control consumption of such things as alcohol, junk foods, sodas, and other unhealthy indulgences, without doing more harm than good?  The book clearly and compellingly argues for a mix of laws that permit consumption but discourage excesses, and for finding that mix through trial and error.  This fascinating book is as must read for anyone who cares about promoting health as well as human rights in a market-driven economy.