The USDA has announced some changes to the school food rules implemented in the previous administration.  The USDA press release explains:

By codifying these changes, USDA acknowledges the persistent menu planning challenges experienced by some schools, and affirms its commitment to give schools more control over food service decisions and greater ability to offer wholesome and appealing meals that reflect local preferences.  [Translation: USDA is committed to letting schools serve junk foods].

It’s worth reading the Federal Register notice:, which reveals:

Most schools had implemented the previous rules just fine.  In today’s Orwell-speak, greater “flexibility” means that USDA cares a lot more about the health of the companies that sell meals and snacks to schools than it does to kids’ health.

These changes provide further evidence of corporate capture of USDA.

The USDA announces its revised school meal rules, in words that would make George Orwell proud:

The U.S. Department of Agriculture (USDA) today provided local food service professionals the flexibility they need to serve wholesome, nutritious, and tasty meals in schools across the nation. The new School Meal Flexibility Rule…reflects USDA’s commitment, made in a May proclamation to work with program operators, school nutrition professionals, industry, and other stakeholders to develop forward-thinking strategies to ensure school nutrition standards are both healthful and practical…This action reflects a key initiative of USDA’s Regulatory Reform Agenda, developed in response to the President’s Executive Order to alleviate unnecessary regulatory burdens.

Try and get your head around this.  The revised rules make school meals less nutritious.  They allow schools to:

This rule will be in effect for SY 2018-2019. USDA is accepting public comments for longer term use at www.regulations.gov.

I will never understand why adults would lobby to make school meals less healthful, but here is the School Nutrition Association praising the changes.  The Association cites survey data indicating that 65 percent of school districts are having trouble with whole grains and 92 percent with sodium requirements.

I love Margo Wootan’s quote (she is director of nutrition policy at the Center for Science in the Public Interest):

The proposal is a hammer in search of a nail…Virtually 100 percent of schools are already complying with the final nutrition standards, including the first phase of sodium reduction.

In a press release yesterday from New York City:

NEW YORK — Schools Chancellor Carmen Fariña, City Council Speaker Melissa Mark-Viverito and Public Advocate Leticia James today announced that lunch is now free for every student at every public school across New York City. Free School Lunch for All will provide over 200,000 more students with free lunch starting this school year. Last school year, 75% of students were eligible for free lunch and starting this school year, 100% of families will be eligible to receive free lunch.

New York City has sought all forms of funding for meal reimbursement and is now eligible to receive the highest reimbursement from the federal government through the Community Eligibility Provision (CEP). This federal program allows school districts to provide meals free of charge to all enrolled students.

The press release has enthusiastic quotes from just about everyone who gets credit for this (and grateful thanks to all of you), but here’s the one from Jan Poppendieck who has been advocating for this for years:

“There is no more important step the City could have taken to promote the health, academic success, and wellbeing of our children. Free school lunch for all, without stigma or bureaucratic hassle, will not only secure access to healthy school meals for all NYC students, it will enhance the entire school dining experience. Now school lunch can truly become an integral part of the school day, a social center and a learning experience, integrated with the curriculum. The CUNY Urban Food Policy Institute applauds the Mayor, the City Council, the Office of School Food and Nutrition Services, and all of the advocates in the Lunch For Learning Campaign who have worked so hard to bring us to this day,” said Jan Poppendieck, Senior Fellow, CUNY Urban Food Policy Institute and author, Free For All: Fixing School Food in America.

Her book got everyone thinking about how much free lunches make sense.  And now it’s happening!  Congratulations to all!

Weekend reading: Power of a Plant

Stephen Ritz with Suzie Boss.  The Power of a Plant: A Teacher’s Odyssey to Grow Healthy Minds and Schools.  Rodale, 2017. 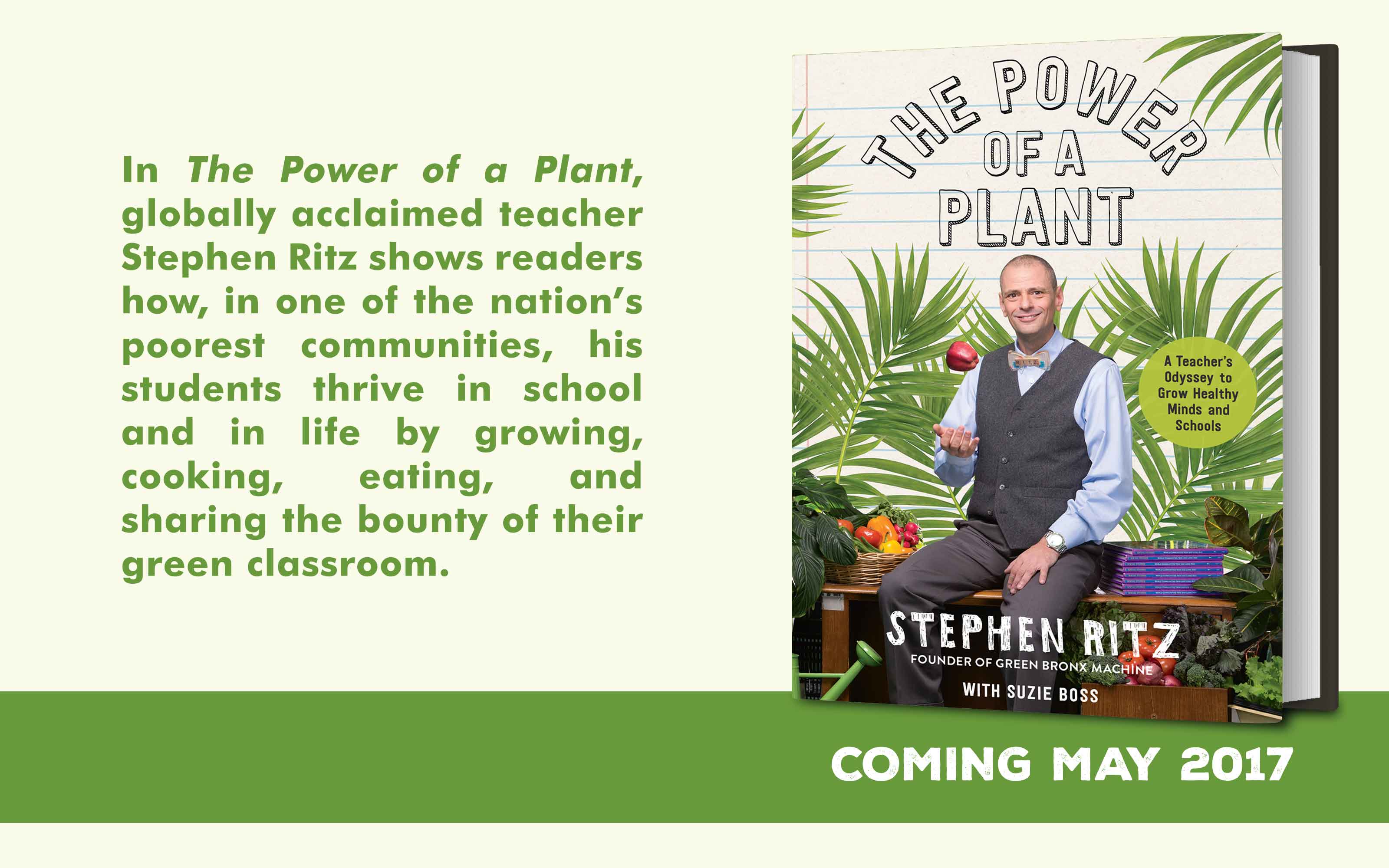 I did a blurb for this most entertaining book:

Here’s proof positive that one person can make a difference.  Stephen Ritz uses food plants—the Bronx Green Machine–to transform kids and their school environments.  You can do this too!

It’s pretty depressing to watch what’s happening to the gains in food and nutrition policy so hard won in the last few years.

Nothing but bad news:

Menu labeling:  The FDA is submitting interim final rules, a tactic to delay implementation of menu labeling, which was supposed to start on May 5.  Why?  The National Association of Convenience Stores and the National Grocers Association filed a petition asking for the delay.   Pizza sellers have been lobbying like mad to avoid having to post calories.

Food labels (calories, added sugars): As the Washington Post puts it, the food industry is counting on the current administration to back off on anything that might help us all make better food choices.  At least 17 food industry groups have asked for a delay in the compliance date for new food labels—for three years.  Why?  They are a burden to industry.  The soon-to-be FDA Commissioner, Scott Gottlieb, said this about food labels:

As a general matter, I support providing clear, accurate, and understandable information to American consumers to help inform healthy dietary choices,” Gottlieb wrote, according to documents obtained by The Washington Post. “ … However, I am mindful of the unique challenges that developing and communicating such information can pose, particularly on small, independent businesses.”

School meals: The USDA says it is about to announce new school meal “flexibility” (translation: rollback of nutrition standards).

Addition: It gets worse.  Politico reports that the congressional spending bill:

Contains a rider blocking funds from being used to work on “any regulations applicable to food manufacturers for population-wide sodium reduction actions or to develop, issue, promote or advance final guidance applicable to food manufacturers for long term population-wide sodium reduction actions until the date on which a dietary reference intake report with respect to sodium is completed.”

Politico also points out that the previous draft of the appropriation bill merely encouraged FDA to delay its salt reduction proposal until the reference intake report is updated (this, by the way, will take years).

I will miss her.  Dana was my go-to person for information about school meal funding, a fierce advocate for getting more funding for school food service.  If you wanted to understand school food politics, her columns at Beyond Chron were essential reading.  The last one was posted September 19, 2016 with good and bad news about San Francisco’s school meals.

I often referred to her columns in this blog.  Here are some examples dating back to 2008:

Dana: I will miss your tough, on-the-ground analysis of school food politics.  You always called it as you saw it.  And you saw plenty.

May others take up your cause.  Now.

The rolling back of nutrition standards

The new administration is hard at work undoing the gains of the last one.

In my post on the nominee for FDA Commissioner, Scott Gottlieb, I noted that he’d been saying nothing about food.  Now he is.

He told Congress this week that he’s open to “pushing back the Nutrition Facts label update deadline [of July 2018] to align it with USDA’s coming GMO labeling regulation.”

The Center for Science in the Public Interest (CSPI) has plenty say about this.  As it explains, the food industry wants the

deadline to be pushed back to align with the USDA’s coming GMO disclosure regulation — a measure that isn’t likely to kick in for a few years (at least)… Gottlieb suggested during the hearing that he may be open to aligning the deadlines…You want to try to consolidate the label changes when you’re making label changes as a matter of public health, he said, adding that requiring companies to update their labels repeatedly is costly.

But wait!  Doesn’t this sound just like what food company leaders said in March in a letter to HHS Secretary Tom Price?

On behalf of the food and beverage industry, we are writing to express our concern with the current compliance deadline of July 2018 for the Nutrition Facts and Serving Size (NFL) rules and to request extending the deadline to May 2021.

Reminder: Everyone would be healthier eating less sugar.

According to Politico, Senate Agriculture Chairman Pat Roberts wants the USDA to undo the school meal nutrition standards put in place by the Obama administration.  In a letter to the USDA Acting Deputy Secretary, Roberts said:

I urge you to act administratively and provide immediate relief from certain egregious aspects of the standards, particularly in regards to the rapidly approaching sodium limits and the dairy and whole grain requirements,..After providing immediate relief, I urge you to provide long-term flexibility and certainty for our schools, our food service directors, and other stakeholders.

Charles Platkin of Hunter’s Food Policy Center sent me this photo taken on the subway a week or so ago. A croissant to advertise the school system’s breakfasts?

Charles and a colleague greatly favor the school breakfast program, but the ad?  Not so much.  They discuss it in a post: “Unhealthy Health Advertising May Stimulate Eating and Send the Wrong Message.”

“I’m in favor of kids getting breakfast in schools. It saves lots of problems for parents and ensures that kids start the day with some food in their stomachs. It’s wonderful that the New York City Schools are doing this. With that said, the devil is in the details. I assume that all breakfasts meet USDA nutrition standards.

But croissants? These can be delicious—all that butter–but I wouldn’t exactly call them “healthy” and I’m wondering whose bright idea it was to choose that item to display. Looking at the menus for December, they are largely grain-based—bread, granola, tortillas, bagels, cereals, and the like—along with fruit and milk.   I think they look pretty good—they certainly could look a lot worse–but the proof is in the eating. Some parents will hate these breakfasts (too much sugar, too many packages, not enough protein). Others ought to be grateful. Ideally, cooks would be making delicious hot breakfasts for kids in school but that isn’t going to happen and from my standpoint this is a reasonable compromise. Presumably, kids who ate breakfast at home won’t need or take these items. I’d like to see them in action to really get an idea of how this is working.