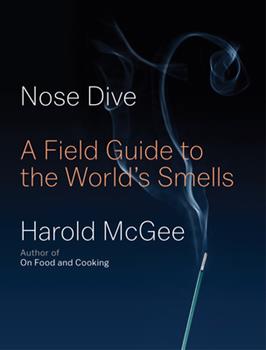 Harold McGee, author of the astonishing On Food and Cooking, sent me a copy of his equally astonishing new book, this one an encyclopedia of the smells of everything—the “osmocosm.”

I am happy to have it.  He’s produced a life-changing book.  I will never think of smells in the same way again.

For starters, the book is brilliantly designed with elegant charts, key terms in bold, and chemical structures (yes!) right next to the terms in miniature on a light grey background, set off from the text but right there where they are needed.  Here’s an example from the pages that Amazon.com makes available.  This excerpt comes from a section on the smells of chemical compounds found in interstellar space (p. 19—and see my comment on the page number at the end of this post).

Interstellar space?  Well, yes.  Also animals, pets, and human armpits, along with flowers, spices, weeds, fungi, stones (they have bacteria and fungi on them), asphalt, perfumes, and everything else that smells or stinks—as well as foods, of course.

McGee must have had fun writing this.

It’s exactly becasue CAFOs [Concentrated Animal Feeding Operations] are offensive and harmful that the volatiles of animal excrement have been so well studied.  Crazily but appropriately, chemists borrow the terminology of top, middle, and base notes from the perfume worls (see page 477) to describe the smells of CAFOs.  The top notes, very volatile and quickly dispersed, are ammonia and hydrogen sulfide.  The more persistent middle notes include amines, thiols and sulfides, aldehydes and alcohols and ketones.  The constantly present base notes are the short-chain straight and branched acids, cfresol and other pehnolics, and skatole.  In a 2006 study of swine and beef cattle operations, barnyard cresol was identified as the primary offensive odor, and could be detected as far as ten miles (sixteen kilometers) downwind.  It’s probably the first long-distance hint I get of that I-5 Eau de Coalinga (p. 71).

But let me be clear: this is an encyclopedia, demanding close attention to the chemistry.  Sentences like this one come frequently: “The branched four-carbon chain (3-sulfanyl-2-methyl butanol) has its branch just one carbon atom over from the otherwise identical molecule in cat pee” (p.121).

But this blog is about food.  McGee’s discussion of food smells are riveting.  For example:

It should be clear from these excerpts that this is a reference work—a field guide—just as advertised.  If you read it, you will learn more than you ever dreamed possible about the volatile molecules that we can and do smell.

Nose Dive will go right next to On Food and Cooking on my reference shelf.

But uh oh.  How I wish it had a better index.

For a book like this, the index needs to be meticulously complete—list every bold face term every time it appears—so readers can find what we are looking for.  This one is surprisingly unhelpful.

I found this out because I forgot to write down the page number for the fatty acid excerpt shown above.  I searched the index for most of the key words that appear in the clip: fatty acids, short and branched; butyric; methylbutyric; hexanoic; cheesy; intersteller space. No luck.  I had to check through all of the fatty acid listings and finally found it under “fatty acids, and molecules in asteroids, 19.”   Oh.  Asteroids.  Silly me.

I also forgot to note the page for the CAFO quote.  CAFO is not indexed at all, even though it appears in bold on the previous page, and neither does its definition, Concentrated Animal Feeding Operation.

McGee refers frequently to “Hero Carbon,” the atom basic to odiferous molecules.  I couldn’t remember where he first used “Hero” and tried to look it up.  Not a chance.

Rebecca Earle.  Feeding the People: The Politics of the Potato.  Cambridge University Press, 2020. The historian Rebecca Earle uses the potato as an entry point into investigations of some of the most important political issues of our time: immigration, free-market capitalism, and globalization.  As she puts it, her book

offers a deep history of the concept of food security and fresh account of how eating became part of modern politics.  It also helps to explain our own fraught relationship with dietary guidelines by showing how healthy eating became embedded within a neoliberal framework valorising personal responsibility and choice rather than state-led intervention” (p. 3).

A couple more excerpts to give you an idea where she is headed with this.  Malthus, she says, had a “dismal vision of catastrophic population increase.”  With this vision

came pessimism about the potato’s capacity to contribute to national well-being.  Far from increasing trade and boosting economic exchange, the potato bcame an obstacle to modernity, because it helped sustain precisely the sectors of the population that capitalism aimed to eradicate” (p. 141).

Later, she describes the Peruvian International Potato Center (its Spanish acronym is CIP):

Peru is not alone in its gastronational celebration of local potato varieties.  A number of countries, from Denmark to Ecuador, have likewise established national potato days, or sought to protect specific varieties under international legislation…International regulatory structures thus help to nationalise potatoes by according them formal status as part of the national patrimony.  Its long history as an overlooked, localised food resource now enables the potato to toggle between the global food system and notions of culinary heritage, in a way that other major commodities such as sugar or maize have largely failed to do (pp. 197-198). 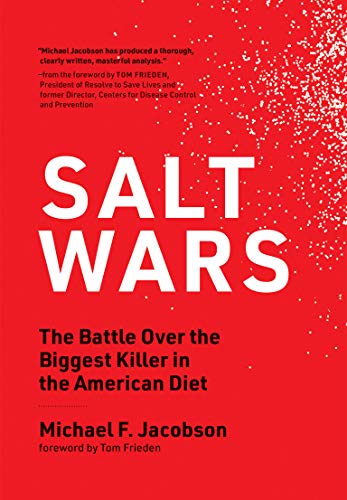 Michael Jacobson was one of the founders of the Center for Science in the Public Interest, which he directed for more than 40 years.

His book comes with an introduction by Tom Frieden, former head of New York City’s Health Department and Director of the CDC.

I wrote a blurb for it:

Public health authorities advise eating less salt as a way to prevent high blood pressure, but a few scientists disagree. For anyone confused by these arguments, Salt Wars is a must read.  Michael Jacobson has been fighting these wars for decades, and his assessment of the research on both sides—and the policy implications–is exceptionally fair, balanced, and fascinating.

I was interested to read this book because I was a member of the Berkeley Co-op grocery store on Shattuck Avenue back in the day and am a member of the Ithaca Co-op now.  Co-ops are member-owned.

Upright based this book on his doctoral thesis about the history of the co-op movement in Minnesota, which aimed to promote production and sales of organic foods.

It is important to study these stores and their stories because it is difficult to understand what “organic” means today without knowing what it could have been, without exploring how this new product, sold in these unconventional settings, attracted the passions of those who wanted to make their world a better place (p. 5).

The difficulty, as Upright puts it, was in trying to run a business and a social movement in one space.

A co-op will cease to exist if it continually operates at a loss.  But co-ops are generally not oriented toward generating a profit.  In fact, state laws often dictate that surplus revenues must be reinvested in the organization or returned to its members…Remaining true to their social values helps maintain the patronage and support of the members who consciously choose to participate, thus keeping the business viable (p. 79).

Between 1971 and 1975, co-ops promoted ideologies of opposition to larger capitalistic structures.  Particularly in the Twin Cities, new-wave co-ops opened primarily in areas characterized by institutions of higher learning and strong leftist political leanings.  They formed as art of a larger rejection of mainstream economic policies, attempting to place more power in the hands of lower-income consumers; the array of foods they sold reflected a liberal cultural and political agenda, balanced by the need to sell enough product of any kind to stay in business (p. 125).

This movement was important because in many ways, it succeeded.

The goal so many worked toward…has been achieved; organic food has now achieved mainstream acceptance.  Even so, cooperatives thrive…The social change many championed when this movement began more than forty years ago—the hope that they could challenge the dominance of prevailing agricultural paradigms—has been realized without leading to the irrelevance of co-ops (p. 210).

Today is the official publication date for my latest book.  This one is unusual for me.  It is tiny (4″ by 6″), short (fewer than 200 pages of text), and done in a Q and A format.  Kerry Trueman asks the questions in mini-essays.  I answer them in brief essays intended for anyone who eats.

I will be discussing the book via Zoom:

The Table of Contents is here.  You can read the Introduction here. 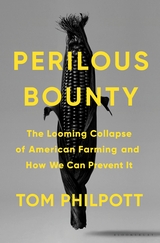