Industry-funded opinon of the week: eggs and cholesterol

Opinion:  This review says that although Japanese people eat more eggs than Americans, they may be protected against higher cholesterol levels due to the differences in everything else they eat (more seafood, for example?). Conclusion: “Although randomized controlled trials with long-term follow-up are required to evaluate the association between consumption of eggs and human health, available information, at least from the nutritional viewpoint, suggests that egg is a healthy and cost-efficient food worldwide.”

Comment: Really?  No conflicts of interest?  But Kewpie is Japan’s #1 mayonaise company.  Kewpie says that it “uses about four billion eggs a year. Recognizing that eggs contain all the necessary ingredients for creating life, we continually study ways of effectively utilizing such ingredients and manufacture fine chemicals for use in a broad range of food, cosmetic, and pharmaceutical applications.”

One of those ways, apparently, is to get its employees to write opinion pieces like this.

The American Heart Association notes that eggs are the leading source of dietary cholesterol but their negative effects may be confounded by the fact that they are so often eaten with bacon and sausage.  The AHA egg recommendations:

And even with that said, the authors should have disclosed Kewpie’s evident conflicted interests.

Should organic eggs be labeled “healthy?” Their producers think so.

You have to have some sympathy for egg producers.  Egg consumption has been declining for years.

Egg producers blame the decline on cholesterol concerns; eggs are by far the largest dietary source of cholesterol.

Now Pete and Gerry’s Organic Eggs is petitioning the FDA to forget about cholesterol and update its definition of “healthy” so the company can advertise its eggs as “healthy.”

FDA Commissioner Scott Gottlieb said in a speech last month that the FDA would be updating the definition.

I, of course, think “healthy” is a slippery slope best avoided, and that Congress never should have allowed health claims on foods in the first place.,

But too late for that.

I don’t envy the FDA’s challenge here.  The petition is based on the dietary guidelines, but what the guidelines say about dietary cholesterol, and therefore eggs, is extremely confusing.

As I explained in a previous post, the guidelines no longer recommend a cap on dietary cholesterol of 300 mg/day (the equivalent of 1.5 eggs), but do say that people should eat as little cholesterol as possible.

Good luck on this one.

The Physicans Committee for Responsible Medicine (PCRM), a group advocating against use of animals in research but for vegetarian and vegan diets, has started a campaign to restore egg-and-cholesterol recommendations to the Dietary Guidelines for Americans.

Eggs are the largest source of cholesterol in American diets.

The campaign involves billboards like this one, in six locations in Texas:

It also involves a new organization (truthaboutegg.org) with an interactive website on a dozen issues related to egg production and consumption.

The one that particularly caught my eye was #5.

A 2013 review suggested that high-cholesterol foods have only a modest effect on blood cholesterol. Of the 12 studies it relied on, 11 were industry-funded.

This week, billboards near your Texas offices will alert you to the dangers Americans face if cholesterol warnings are removed…Eggs are the leading source of cholesterol in the American diet.  A report (which I’ve included for your review) in the autumn 2015 Good Medicine magazine finds that this recommendation may have been influenced by egg-industry-funded cholesterol research. America’s heart disease and diabetes epidemics will continue unabated if the egg industry succeeds in its efforts to get cholesterol warnings out of the guidelines.

Cholesterol. Previously, the Dietary Guidelines for Americans recommended that cholesterol intake be limited to no more than 300 mg/day. The 2015 DGAC will not bring forward this recommendation because available evidence shows no appreciable relationship between consumption of dietary cholesterol and serum cholesterol, consistent with the conclusions of the AHA/ACC report.2,35.  Cholesterol is not a nutrient of concern for overconsumption.

The DGAC based its unconcern about dietary cholesterol on two references:

There is insufficient evidence to determine whether lowering dietary cholesterol reduces LDL–C.

compared with those who never consume eggs, those who eat 1 egg per day or more are 42% more likely to develop type 2 diabetes. Among diabetic patients, frequent egg consumers (ie, > 1 egg/d) are 69% more likely to have CVD comorbidity…This meta-analysis suggests that egg consumption is not associated with the risk of CVD and cardiac mortality in the general population. However, egg consumption may be associated with an increased incidence of type 2 diabetes among the general population and CVD comorbidity among diabetic patients.

Were these references based largely on studies funded by the egg industry?  If so, PCRM is correct in arguing that the question of egg consumption and blood cholesterol levels merits much closer scrutiny and analysis than it is currently receiving.

What does a study funded by the egg industry look like?  Here are two one from my recent collection:

What’s up with the cholesterol guideline?

The Washington Post says that the 2015 Dietary Guidelines Advisory Committee is about to drop the long-standing guideline about restricting dietary cholesterol.

The 2010 Dietary Guidelines said “Consume less than 300 mg per day of dietary cholesterol.”

This is about the amount in one egg.

I have no idea what’s going on.  The Advisory Committee report has not yet been released so I don’t know what it says (I’ve heard rumors that it is to be released this week, which could mean late Friday afternoon on a holiday weekend).

Recall: no matter what the Advisory Committee says in its report, it does not write the Dietary Guidelines.  The agencies—USDA and HHS—do whatever they choose with the committee’s research report.

If the Committee really is dropping the guideline, I’d like to see its research rationale.

I’m wondering if research sponsored by the egg industry could have anything to do with this.

See, for example, this recent study concluding that people with coronary heart disease don’t have to worry about eating eggs.

We found no evidence of adverse effects of daily egg ingestion on any cardiac risk factors in adults with CAD over a span of 6 weeks.

You have to read the study carefully to find the funding source (these are usually at the end of articles, but this one is in the middle):

Disclosures. This study was conducted with funding from the Egg Nutrition Center/American Egg Board and the Centers for Disease Control and Prevention (Grant
No. 5U48DP001945-05).

And you have to read the tables carefully to find out that 90.6% of the subjects in this study were taking statins, nearly 90% were taking drugs to lower blood pressure, and nearly 80% were taking aspirin.  The discussion, however, does not mention this point making this study a classic example of the problems with conflicts of interest in research.

If the Advisory Committee is dropping the cholesterol recommendation, could it be because so many people are taking statins that dietary cholesterol doesn’t appear to matter so much anymore?

This story is getting a lot of press.  Here’s one from USA Today that quotes me and changes my name as it goes along (they have now fixed that).

Can’t wait to see what the report really says.

What’s up with the new cholesterol/statin guidelines?

Last week, a Feedback comment from a reader, Judith Rice-Jones, inspired me to try to understand what’s going on with the new heart disease prevention guidelines (I can’t say I’m succeeding very well).

Looking forward to your response to the recent recommendations for more people to take statins. Don’t see anything in the new recommendations about changing lifestyle or diet to reduce risks of stroke or heart attack.

Yes, there are lifestyle recommendations.   But lifestyle changes do not make money for drug companies, and they don’t get press attention.

AHA and ACC are pleased to announce a series of new cardiovascular prevention guidelines for the assessment of cardiovascular risk, lifestyle modifications that reduce risk, management of elevated blood cholesterol, and management of increased body weight in adults. These guidelines are based on rigorous, comprehensive, systematic evidence reviews originally sponsored by the NHLBI. The ACC and AHA collaborated with professional organizations to finalize these AHA/ACC cardiovascular prevention guidelines, and stakeholder organizations were invited to review and endorse the final documents.

So these guidelines are a major big deal.  The New York Times said you need to know three things about them:

As the New York Times also suggested, the new guidelines have taken many by surprise.

This is an understatement.

This announcement is not a result of a sudden epidemic of heart disease, nor is it based on new data showing the benefits of lower cholesterol. Instead, it is a consequence of simply expanding the definition of who should take the drugs — a decision that will benefit the pharmaceutical industry more than anyone else.

This opinion piece points out that members of the group writing the recommendations have financial ties to drug makers, as do both the AHA and ACC.

The guidelines might make sense, they say, if statins

actually offered meaningful protection from our No. 1 killer, heart disease; if they helped people live longer or better; and if they had minimal adverse side effects. However, none of these are the case…as shown in a recent BMJ article co-written by one of us.

Perhaps more dangerous, statins provide false reassurances that may discourage patients from taking the steps that actually reduce cardiovascular disease…80 percent of cardiovascular disease is caused by smoking, lack of exercise, an unhealthy diet, and other lifestyle factors. Statins give the illusion of protection to many people, who would be much better served, for example, by simply walking an extra 10 minutes per day.

The lead article in today’s Times summarizes studies to be published in The Lancet tomorrow concluding that the risk calculator makes the risks seem greater than they really are.

It will lead many doctors to prescribe statin drugs to people who do not need to take them (from the standpoint of drug companies, that’s the point). 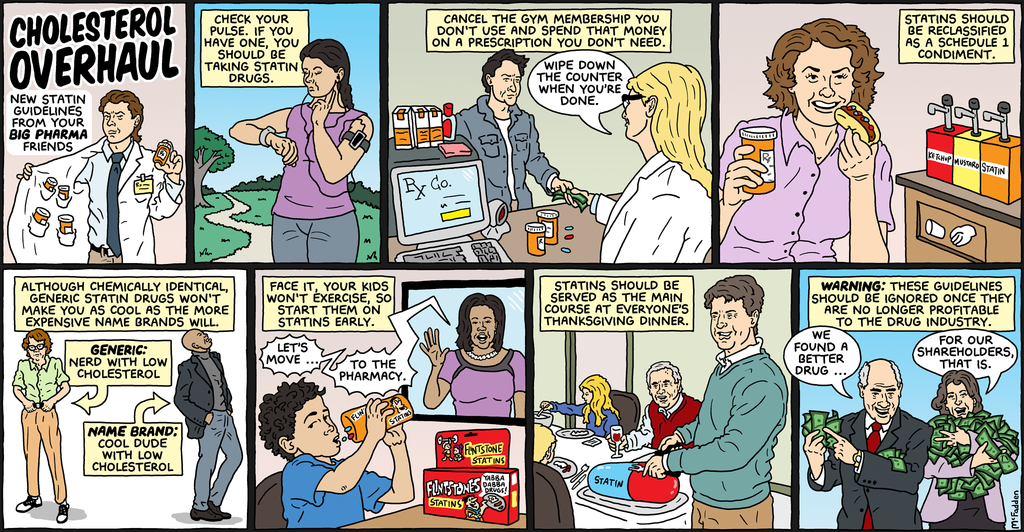 The nutrition committee of the American Academy of Pediatrics has just issued a new set of recommendations for cholesterol screening.  The advice of this august body?  Screen 2-year-olds for high cholesterol and start prescribing statin drugs at age 8.  OK, they are just recommending this for kids with risk factors, such as high LDL cholesterol (the bad one), family history of heart disease, obesity, diabetes, metabolic syndrome, etc.   This sounds great for doctors, testing labs, and drug companies.  Is it a good idea for kids?  Which kids?  Who is going to pick up the tab for this?