What is the role of the food industry in helping to address world malnutrition?  This collection of articles from Nutra-Ingredients.com begins with a viewpoint from Nestlé (no relation), the world’s largest food company.

Nestlé: Profit is not a dirty word in the race against global malnutrition

Big food companies like Nestlé are oft-criticised for being a factor in the spread of non-communicable diseases like obesity and diabetes with less healthy food offerings but all are engaged in shifting their portfolios to the healthier end of the spectrum, and their capacity to deliver benefits with fortified offerings to malnourished populations can be overlooked.“The food industry is a commercial enterprise – that won’t change – but it has immense power to bring nutrients to the populations that needs them the most.

Here are the other articles in this series.

I was surprised by FoodNavigator-USA’s story about “SmartCandy,”—a “vitamin-infused snack.”

Could the name and contents of this candy be violating the FDA’s “jelly bean” rule?

The “jelly bean” rule refers to FDA’s fortification policy,* which aims to discourage food and beverage makers from adding vitamins to “foods of minimal nutritional value” (a.k.a. junk foods) so they can be marketed as healthy.

The policy is explicit.  The FDA does not consider it appropriate to add nutrients to candies and beverages.

Here’s what the article says about what’s in it:

Smartcandy is formulated with a blend of Vitamin A for eye health, three B vitamins to support converting sugar and carbohydrates into sustained energy, and vitamin C for immunity. The trans fat-, high-fructose corn syrup-free candies come in four varieties: sweet and sour gummies; and Froot, a proprietary snack with a candy shell and a layer of yogurt encasing a strawberry or orange center.

Here’s the Nutrition Facts label (thanks to a reader for sending).

Here’s what the website says Orange Froot candy can do:

This is the visionary leader of the snacking world, it’s the one they listen to and admire. He can make a three point shot with his eyes closed, build the best fort you’ve ever seen, or solve an algebra question like it was a nursery rhyme, this flavor packed snack will push you to achieve anything!

If SmartCandy can get away with this, won’t Coca-Cola and Pepsi be next?

Candy is candy and has an place in kids’s diets—occasionally.  But a health food that makes kids do better in school?  I’d like to see the evidence for that.

*Thanks to Michael Jacobson for forwarding.

FDA study: Do added nutrients sell products? (Of course they do)

The FDA has announced that it will be studying the effects of nutrient-content claims on consumers attitudes about food products.

FDA does not encourage the addition of nutrients to certain food products (including sugars or snack foods such as [cookies] candies, and carbonated beverages). FDA is interested in studying whether fortification of these foods could cause consumers to believe that substituting fortified snack foods for more nutritious foods would ensure a nutritionally sound diet.

Here’s one of my favorite examples of what the FDA is talking about. I’m guessing the FDA’s new research project is a response to increasing pressure from food companies to be allowed to add nutrients to cookies, candies, and soft drinks.

Food marketers know perfectly well that nutrients sell food products.  The whole point of doing so is to be able to make nutrient-content claims on package labels.

The FDA has never been happy about the practice of adding nutrients to junk foods just to make them seem healthy.   Its guidance includes what is commonly known as the “jelly bean rule.”   You may not add nutrients to jelly beans to make them eligible to be used in school lunches.

Plenty of research demonstrates that nutrients sell food products.  Any health or health-like claim on a food product—vitamins added, no trans fats, organic—makes people believe that the product has fewer calories and is a health food.

As I keep saying, added vitamins are about marketing, not health.

What is there to say about Girl Scout cookies.  Everybody loves them (or is forced to).

But now, if you worried that promoting cookies maybe wasn’t the best public health strategy, ABC Bakers, the company that makes them, has solved your problem. 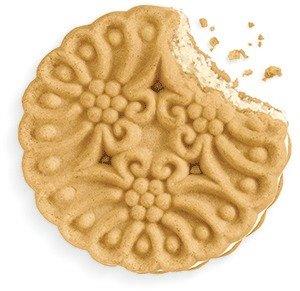 As the company explains, NutriFusion is delicious made nutritious.

These crunchy vanilla and coconut cookies with a mango-flavored crème filling have all the nutrient benefits of eating cranberries, pomegranates, oranges, grapes, and strawberries.

As I keep saying, you can’t make this stuff up.

I can hardly believe it but is the FDA really proposing to test consumer understanding of food industry evasions of the “Jelly Bean Rule?”

The FDA established this “rule” (a principle, actually) in 1994 to prevent food companies from adding vitamins to junk foods in order to allow them to be marketed as healthy.

The FDA said that just because a food is low in fat, cholesterol, and sodium—like a jelly bean—the manufacturer cannot make a health claim for it unless it contains at least 10% of the Daily Value of vitamin A, vitamin C, calcium, protein, fiber, or iron.

But, the FDA also said, companies could not fortify foods with these nutrients for the sole purpose of making health claims.

The addition of nutrients to specific foods can be an effective way of maintaining and improving the overall nutritional quality of the food supply.

However, random fortification of foods could result in over- or underfortification in consumer diets and create nutrient imbalances in the food supply.

It could also result in deceptive or misleading claims for certain foods.

The Food and Drug Administration does not encourage indiscriminate addition of nutrients to foods, nor does it consider it appropriate to fortify fresh produce; meat, poultry, or fish products; sugars; or snack foods such as candies and carbonated beverages.

Now the FDA announces that it wants to study consumer responses to health claims on fortified snack products:

The FDA has an interest in the American public achieving and maintaining diets with optimal levels of nutritional quality, wherein healthy diets are composed of foods from a variety of nutrient sources.

The FDA does not encourage the addition of nutrients to certain food products (including sugars or snack foods such as [cookies] candies, and carbonated beverages).

FDA is interested in studying whether fortification of these foods could cause consumers to believe that substituting fortified snack foods for more nutritious foods would ensure a nutritionally sound diet.

And companies will have plenty of time to lobby.

Like all FDA processes, this one is required to move at glacial speed.  It must give 60 days to allow people to comment on the proposal and get their lobbying acts together.

Then, the FDA will have to review the comments and, presumably, include them when it submits its request to do the study to the White House Office of Management and Budget.

No point in holding breath for this one.  The OMB has been sitting on FDA proposals for months.

My prediction: if the FDA ever gets to do the study, it will show that consumers interpret health claims as government guarantees that the products are healthy and, probably, have fewer calories than they actually do.

The makers of such products would prefer that the FDA not have this information confirmed.  Watch the lobbying begin!

Soft drinks as a solution to childhood malnutrition? I don’t think so.

Here is another one you can’t make up.  An article in Pediatrics, entitled “Malnutrition and the role of the soft drink industry in improving child health in sub-Saharan Africa,” advocates for fortifying soft drinks with micronutrients (vitamins and minerals).

Oddly, it does this after explaining how consumption of soft drinks actually”perpetuates problems of undernutrition in children, pregnant women, and other vulnerable populations in the developing world.”   Why?  Because in “sub-Saharan Africa, for example, distribution of soft drinks and other beverages produced by soft drink companies is extensive, and consumption is high given the extensive poverty in this part of the world.”

The authors justifiably complain about how little attention has been paid to the ways in which soft drink companies perpetuate malnutrition.

But instead of suggesting public health measures to counter the well documented effects of soft drinks on rising rates of obesity or on tooth decay rates among children in developing countries, the authors want soft drink companies to add vitamins and minerals to the drinks.

The Bill Gates foundation recently partnered with Coca-Cola in Uganda to increase production and distribution of mango and passion fruit juice as a way to stimulate production of local mango and passion fruit juice and meet Coca-Cola’s demand for
increased fruit to stimulate sales; however, such a partnership should also ideally involve micronutrient fortification, because Coca-Cola estimates that this partnership will extend sales in coming years. The World Economic Forum recommends fortification of food and beverages by private companies as an approach to reduce malnutrition, to
boost a productive workforce, and to stimulate the global economy.

Fortunately, colleagues in Brazil have written a letter in response: “Can the soft drink industry prevent child malnutrition?  No way.”

What the impoverished populations of Africa, Asia and Latin America need, are the means with which to lead a decent life. These include secure local food systems and supplies, access to safe water and adequate sanitation, decently resourced primary health care services, ability to produce and prepare meals from immediate and local resources, universal primary education, and empowered mothers and other caretakers. Substantial reduction of child undernutrition can be achieved in a relatively short period of time with improved income distribution, population and community self-determination, and public investments in public goods such as education, health, social security, water supplies and sanitation.

What they do not need is more Coca-Cola.

Or, for that matter, Pepsi Cola, which tried the same ploy earlier this year (see previous post).

Sales of Coke and Pepsi are declining in the United States.  What better way to protect sales than to foist these products on the poor populations of emerging economies.

We need to be exporting health, self-determination, and democracy, not sugary drinks.