I was fascinated to see this article about how offering kids greater amounts and varieties of snack foods encourages them to eat more and, therefore, take in more calories.  Snack variety has a greater effect than just larger package sizes (1).

This article immediately reminded me of the infamous cafeteria diet studies of the late 1980s.  The investigators fed rats all kinds of junk foods and compared the calories they ate to those eaten by control rats allowed only rat chow.  The cafeteria-fed rats ate more (2).

This, of course, is what Kevin Hall and his colleagues found when adults were allowed to eat as much as they wanted of ultraprocessed junk foods (3).

Snackification: a new word in my vocabulary

BakeryAndSnacks.com’s Special Edition: Snackex 2019 introduces the concept of “Snackification,” which as far as I can tell is the conversion of three square meals a day to all-day snacking.  Alas, snacks have calories; the more snacks the more calories consumed.  And most are ultra-processed, the term used to describe foods that are best consumed in small amounts.   The more snacks consumed, the happier the snack-food industry will be.  Hence: the push.

We are seeing intense pressure on food companies to adopt more sustainable supply-chain and production practices.  But can an ultra-processed food ever be sustainably produced?  Or, is a sustainable snack food an oxymoron?

In BakeryandSnacks.com’s Spotlight on Sustainability, snack food companies say what they are doing to reduce their impact on the environment:

I keep saying that food companies are not social service or public health agencies and should not be viewed as such.  They are businesses, and everything they do must aim to promote sales and returns to investors.

BakeryandSnacks.com, an industry newsletter to which I subscribe, has collected several of its articles on the anti-hunger activities of its member companies.  Is this public health or public relations?  Read and decide.

When Torsten Veblen wrote The Theory of the Leisure Class in 1899, he could not possibly have imagined this product when he invented the term “conspicuous consumption.”

I am indebted to BakeryAndSnacks.com for its noting the new “bling in snacks:”

The Koikeya Pride Potato Kanazawa Gold Leaf Salt chips are priced at 300 yen for a 68g bag, available at convenience stores across Japan.

The snack maker is also offering an exclusive set that comes with three packages of extra gold leaf that consumers can sprinkle onto the chips.The set, priced at 2,000 yen ($18), includes three 68g (2.4oz) bags of the chips and three 0.12g (0.004oz) packets of extra gold leaf.

Fortunately, gold has no calories.

While Brexit—Britain’s leaving of the European Union—is in turmoil, the industry newsletter, BakeryAndSnacks.com has a few articles on its effects on this industry.  Complicated, no?

I am ever indebted to Dr. Yoni Freedhoff, the Canadian obesity specialist, for keeping a sharp eye out for the more amazing ways food companies push junk foods.

Check out his Weighty Matters blog.  This particular post describes the “Smart Snacks” for kids endorsed by the Alliance for a Healthier Generation, founded by the American Heart Association in partnership with the Clinton Foundation and the Robert Wood Johnson Foundation.

Check out Freedhoff’s selection of “Smart” items drawn from Amazon’s more complete list of Alliance-endorsed items.  Here is his first example (but don’t miss the others): 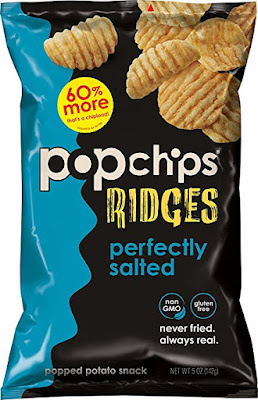 These are all junk foods tweaked to make them slightly less junky, thereby raising the questions I always like to ask in these situations: Is a slightly better-for-you product necessarily a good choice?

I’ve written about the Alliance’s partnerships previously.  As Freedhoff explains,

In case you’re not familiar with it, the Alliance For A Healthier Generations is the name given to the partnership program founded between the American Heart Association, The Clinton Foundation, and The Robert Wood Johnson Foundation with pretty what at first glance looks like pretty much every food industry corporation on earth…[this] is a partnership with the food industry whose job is to promote sales, not to protect health.

How is it possible that the American Heart Association, The Clinton Foundation, and The Robert Wood Johnson Foundation would describe a child washing down a bag of Doritos or a Pop-Tart with a can of Diet Coke as them consuming a Smart Snack?

The American Heart Association should not be a participant in this Alliance.  The “Smart Snacks” program’s endorsement by the Alliance covers these particular products but, by extension, the rest of those companies’ products—and the companies that make them.

I am indebted to BakeryandSnacks.com for this insight into food of the future: jellyfish snacks.

Westerner that I am, I think of jellyfish as exquisite creatures pumping away in the Monterey Bay Aquarium or as horrible stinging aggressors on the beaches of Florida.  Until now, I never thought of eating one.

But now a recent paper extols the potential of jellyfish as chips.

As an example, we have studied jellyfish – a food material mostly uncommon to the Western palate, but a delicacy in traditional Asian cuisine having a gastronomic history of more than a thousand years. It is eaten mainly for its interesting crunchy mouthfeel resulting from a month-long salt preservation using sodium chloride and alum. This preservation drastically changes the texture of the jellyfish from being gel-like to resembling that of pickled cucumbers.

We have used state-of-the-art two-photon microscopy and super-resolution STED microscopy to visualize the rearrangements in the filamentous network constituting the jellyfish mesoglea gel during the transformation from a soft gel to a crunchy texture. We further interpret our data in light of polyelectrolyte theory and a modified Flory-Higgins theory that describes ionic gel collapse in poor solvent to suggest an alternative preservation method. Using ethanol, we thus have created what can be classified as jellyfish chips that has a crispy texture and could be of potential gastronomic interest.

Jellyfish are widely eaten in Asia, by typically marinating the bell (or body) in salt and potassium alum for several weeks to produce a pickle-like texture.  However, the Western palate is unaccustomed to this food source and the jellyfish is often described as “slimy”​ and “tasteless”.

But now, “Scientists from the University of Southern Denmark have developed a technique to turn jellyfish into a crunchy chip, potentially creating a market for aquatic snacks….”

As for nutrition, jellyfish are mostly water and sea water at that; their nutritional composition is like that of sea water, high in sodium but not much else.

Can’t wait to taste one.