What’s up with the Daily Harvest recall?

Daily Harvest is a company that makes vegan meals, mostly organic, and freezes them for home delivery.

By mid-June, it had received 470 complaints from customers who ate a new product, French Lentil + Leek Crumbles, but developed severe liver and gall bladder problems.  On June 23,  Daily Harvest issued a recall of the product “due to potential health risk” (also see After 470 reports of illnesses, Daily Harvest recalls French Lentil + Leek Crumbles). I was especially interested in this event for two reasons: Daily Harvest twice sent me meals to sample (before it introduced this one) and I knew they had to be cooked before eating, which would kill harmful microbes, and I could not imagine what could possibly cause reactions this toxic (as I explained to the New York Times).

More than that, on June 25, food safety lawyer Bill Marler was asking the same question: What is it in Daily Harvest’s French Lentil and Leek Crumbles that is causing liver failure?  He was sending samples out to his own labs.

On June 28, Daily Harvest responds to customers sickened, hospitalized from 1 of its products.

On June 17, 2022, in response to consumer complaints submitted to the company, Daily Harvest voluntarily initiated a recall of their French Lentil & Leek Crumbles…From April 28 to June 17, 2022, approximately 28,000 units of the recalled product were distributed to consumers in the continental United States through online sales and direct delivery, as well as through retail sales at the Daily Harvest store in Chicago, IL, and a “pop-up” store in Los Angeles, CA. Samples were also provided to a small number of consumers. Daily Harvest emailed consumers who were shipped the affected product, and other consumers for whom the company had contact information and consumers were issued a credit for the recalled product. Consumers who may still have the recalled product in their freezers should immediately dispose of it.

On July 1, the FDA announced the recall and issued an advisory for these events.

Rachel here – I want to give you another update on the French Lentil + Leek Crumbles recall. As you know, we’ve been conducting exhaustive testing over the course of the last two weeks. Despite this, we still have not identified a possible cause. I am sorry that it’s taking as long as it is to pinpoint exactly what may have made people sick. We are deeply committed to finding answers for those impacted. We’re working with top doctors, microbiologists, toxicologists as well as 3 independent labs.   While additional testing is underway, results to date rule out the following:

I assure you, we will not stop until we get to the bottom of this. We’re continuing to work in close cooperation with the FDA, CDC and other health agencies. The FDA released an update on their investigation yesterday, which can be found here on their website.

I’m baffled.  I can’t understand why toxin testing hasn’t come up with anything.  The illnesses are real and all traced to this product.

Bill Marler agrees with don’t eat it, but he wants the product saved as evidence.  He has questions and suggestions:

His hypothesis: the Tara ingredient.

We believe that the illnesses may well be linked to a common ingredient called Tara that comes exclusively from Peru (this due because it is a unique ingredient to the French Lentil + Leek Crumbles AND to certain Revive Smoothies where people are reporting identical symptoms).

Here’s what Wikipedia says about Tara:

Tara gum…is produced by separating and grinding the endosperm of T. spinosa seeds…The major component of the gum is a galactomannan polymer similar to the main components of guar and locust bean gums that are used widely in the food industry….Tara gum has been deemed safe for human consumption as a food additive… Medicinal uses in Peru include gargling infusions of the pods for inflamed tonsils or washing wounds; it is also used for fevers, colds, and stomach aches. Water from boiled, dried pods is also used to kill fleas and other insects.

I’ve heard privately from people who experienced sickness after eating this product.  I’ve read about others like this one:

I wish everyone a speedy recovery, and hope the toxin gets identified soon.  Stay tuned.

For the record: I am an omnivore

It took me a while to figure out what they were talking about, but eventually I was sent a link to a story in Vice about people who became ill on vegan diets. The article quotes me:

“Most healthy people should be able to adapt to an all-plant diet,” says Marion Nestle, nutritionist, professor, and James Beard Award-winning author. She emphasizes eating a “variety of plant food sources, taking in enough calories to maintain a healthy weight, and finding a good source of vitamin B12.”

The article describes the health problems reported by some followers of vegan diets.  It quotes me again:

Nestle notes these problems are more associated with “starvation” than a standard plant-based diet, which “should not cause people to lose weight or have any of those issues.” However, Nestle adds that a diet high in fibrous plants can take time to adapt to, and people who have been advised to eat a low-fiber diet “will have problems eating a wide enough variety of plant foods to meet nutrient needs.” In other words, many of these influencers may be masking disordered eating habits that are unsustainable.

So, in answer to the tweets:

There are lots of good ways of doing this.  Enjoy!

A Gallup poll reports the percentages of vegetarians and vegans in America.

You are more likely to say you are vegetarian or vegan if you are:

Want to see how they got these numbers or argue with the results?  The methods are here.

GlobalData, a data and analytics company., says vegan diets will be even more popular in 2018.

The rising number of vegans and how fashionable the cuisine now seems to be, big companies are taking notice; the number of vegan options will increase in both supermarkets and restaurants…These trends will combine to make 2018 the best year yet, in which to follow a vegan diet.

Evidence: McDonald’s is going vegan—at least in Sweden and Finland.

The sandwich, which has already been tested at a handful of McDonald’s locations in Finland, consists of a soy patty, bun, tomato, lettuce, pickles, onion, ketchup, mustard, oil and an egg-less sandwich sauce…McDonald’s said the burger will be on its permanent menu in the two countries, a response to “more and more” people wanting to eat “plant-based food” that is better for the environment.

Wandering around in the Rehavia neighborhood in Jerusalem, I saw a local park with a just-starting composting program. Down the street from the official residence of the Prime Minister (that would be Benjamin Netanyahu), is the headquarters of the International Jewish Vegetarian Society. I’m surprised at how little food advertising I’m seeing.  This restaurant overlooking the crater at Mitzpe Ramon is an example that seems typical.  Nestlé (no relation) ice cream bars are everywhere. Coca-Cola is everywhere too, but this venerable truck is the only one I’ve seen.  This one was in Tel Aviv. 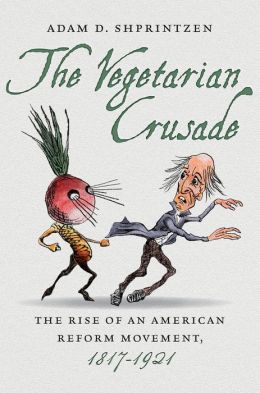 A fascinating account of the nineteenth-century origins of the vegetarian social movement to improve American morality and health. The book stops in 1921 when the Vegetarian Society disbanded, but that movement’s legacy is today’s passionate vegetarians, who comprise a vital part of the current movement to improve food systems and the health of people and the planet.

I am in Munich this week to give a talk at a meeting of environmental historians and will be posting tourist photos.  Here’s today’s from the main tourist area in front of city hall:

My (rather loose) translation:

Eat vegetarian today.  For the sake of health, the animals, and the environment.

I guess the Germans do pig crates too.

The exhibit is sponsored by the Albert Schweitzer Stiftung für Mitwelt (Tr. Foundation for Mankind), a vegan animal-welfare group.

I like this idea.  For starters Bittman is an omnivore, not a vegan.  As he points out, he’s

Someone who has built an entire career on my love of cooking and eating good food.  And VB6 is the way I eat now, and have for six years…VB6 is also realistic…it also maintains that you can love food that tastes good—and eat a lot of it—while you improve your health.

…But you don’t help to go VB6…you need only a commitment to refrain from animal products and hyperprocessed foods until dinner time.

Good idea.  It worked for him and should work for others.

If you are in New York and want him to sign a copy, Bittman is being interviewed tonight at 7;00 p.m. by Sam Sifton at the Barnes & Noble on 17th Street.