USDA’s Economic Research Service has a new report on China’s investment in agriculture and farmland.

The purchases are everywhere: Indonesia, New Zealand, Bulgaria, Jamaica, etc., but some is in the United States.

The report is worth a serious read.  If you aren’t up to that, take a look at the tables and figures.  I wanted to reproduce a lot more of them.

China is eating more dairy foods. Is this good?

I will never understand the push to increase dairy consumption in China.

Many if not most Asian adults lack the enzyme that digests the lactose in milk.  Undigested lactose tends to pass unscathed to the large intestine where bacteria ferment it, producing gas and diarrhea.

So why dairy products?

More protein to promote growth, is what they say.

An article in DairyReporter quotes Mintel research as saying the Chinese are eating more cheese, yogurt, and added protein.

The rising demand for dairy in China, growing at 6% to 7% rate annually, is teetering on outpacing volume growth of the category (increasing by 3% to 4% every year) as the country shows great interest in dairy products, according to Mintel.

The Chinese Nutrition Society issued updated dietary guidelines for Chinese consumers in 2016, recommending that each adult should consume 300 grams (10.6 ounces) of dairy products per day – current consumption is 100 grams (3.5 ounces).

The dairy industry is thrilled:

There is still opportunity for growth of dairy consumption in China, especially from lower tier markets, as a result of consumers’ growing awareness of nutrition intake, increasing household income levels, and the accelerated urbanization process.

Exporters of dairy products to China are particularly thrilled:

Environmentalists are not so thrilled.

One consequence: the replacement of sheep by cows in New Zealand, which now has heavily polluted waterways.

It’s a quiet news day so let’s enjoy one of Food-Navigator’s occasional special editions in which it collects articles on a specific topic, in this case sugar marketing trends in the Asia-Pacific region:

From breakthroughs in ingredients to lively debate over ways to keep consumers healthy, Asia-Pacific has gained a new confidence in its approach to sugar and sweeteners. We explore this spirited segment in a new FoodNavigator-Asia special edition.

I first heard about the impending of Smithfield (the gigantic ham-and-pork company) to the Chinese company, Shuanghui International Holdings, from MeatPoultry.com:

The acquisition positions Smithfield to expand its offerings in China through Shuanghui’s distribution network. Shuanghui will acquire all of Smithfield’s outstanding shares for $34 per share in cash, which is a 31 percent premium…Smithfield’s stock price rose nearly 28 percent to $33.20…Smithfield’s common stock will no longer be publicly traded, and the company will become a wholly owned independent subsidiary of Shuanghui.

MeatPoultry.com also reported a statement from the CEO of Shuanghui:

We are excited about this…Together, [Shuanghui and Smithfield Foods] can be a global leader in animal protein…We are No. 1 in China; Smithfield is No. 1 in the US…Chinese consumers like American pork. US farmers want foreign markets for their pork. This will be a win-win for both countries.

Not exactly, says a e-mailed news release from the Waterkeeper Alliance:

This deal with the Shuanghui – a company with a very recent history of producing tainted food – raises the specter that Americans will lose more control of their food supply, be exposed to tainted food and be left with even more devastated farming communities and drinking water supplies as a result of increased industrialized meat production.

The New York Times put this sale on the front page and Stephanie Strom has an even longer piece on it in the business section.   The Washington Post also had plenty to say.

Smithfield, you may recall, is a company famous for factory farms, pollution, and truly appalling labor practices documented, in among many other places, the movie, Food, Inc.

In 2009, I commented on a previous attempt by Smithfield to sell out to a Chinese company.

We also better figure out how to make our food production system more sustainable and less harmful to farm animals, the environment, farm workers, and consumers. I was a member of the Pew Commission on Industrial Farm Animal Production, which released its report last April. Our report fully documented how CAFOs (confined animal feeding operations) are not nice to animals; pollute air, soil, and water; turn communities into garbage dumps; and promote transmission of nasty—and often antibiotic resistant–microbial diseases to farm workers, community residents, and everyone else.

One major finding of the Pew Commission was that laws protecting communities and the environment currently exist; they just aren’t enforced.  Too bad for anyone living near an industrial pig farm.

Additions, May 31: Reuters discusses the ractopamine issue, said to be key to understanding this deal.  The Chinese do not allow use of ractopamine as a growth promoter, but the U.S. does.  Once Smithfield started phasing out its use, the deal became possible.

Ractopamine is a beta-agonist. Initially developed to treat asthma in humans, ractopamine was found to be extremely effective at changing the metabolism of an animal, so that the animal would quickly and cost-effectively add sought-after muscle. The FDA approved the use of beta-agonists in pigs in 1999, for cattle in 2003 and for turkeys in 2008.

In March, Smithfield Inc., converted its Tar Heel, N.C. plant – the world’s largest pork processing facility – to slaughter only hogs that were raised without the use of ractopamine….the company’s product line will be 50 percent ractopamine-free as of June 1…Earlier this year, China and Russia demanded that all American meat exports be certified ractopamine-free. The U.S. government initially refused these certification demands, so Russia shut down its market to U.S. beef and pork in February.

Addition, June 1: The New York Times writes that the Committee on Foreign Investment is about to undertake a national security review of the deal.  The big questions: Are Smithfield’s sales to the military secure?  Does it use special farming technology that could be transferred to China?  Will Shuanghui have the power to disrupt the U.S. food chain for pork?

Another addition, June 1: Apparently, Shuanghui has a history of findings of maggots, excessive bacteria and illegal additives.

Addition, June 4: Guess who owns half of Shuanghui, the company that wants to buy Smithfield: Goldman Sachs, among others.

Addition, June 5: The Wall Street Journal has this helpful graphic comparing the pork supply chains in China and the U.S. along with an excellent summary of the issues involved. 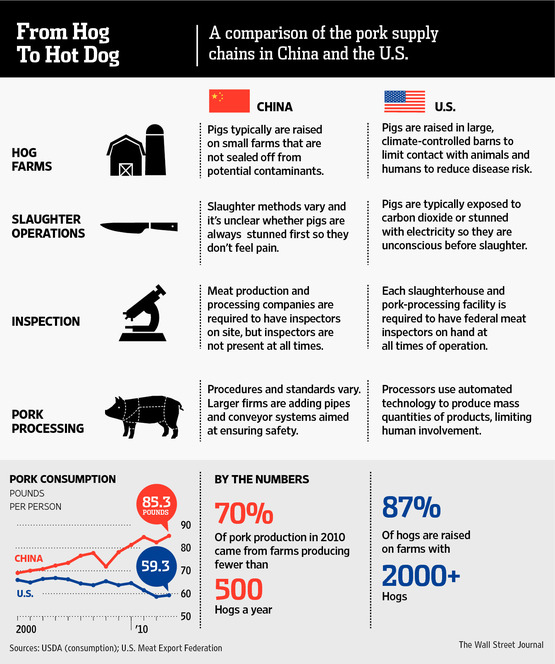 FoodPolitics.com too political for China? Really?

My not quite son-in-law is stage managing a play in China, and writes:

I looked at the pictures of Mayor Koch and you in your kitchen last week and it worked fine.  Now I’m here in Shenzhen & Internet Explorer isn’t able to open your Blog.   See!  That’s what you get for all those nasty things you said about the Chinese baby formulas and pet foods!

I guess he’s referring to my posts on the deliberate adulteration of pet food and infant formula with melamine.  Is this site really blocked?  If so, is it really a threat to the Chinese state?

Seems far-fetched, no?  Anyone know anything about this?

The FDA has just released a classy new report on Global Engagement, summarizing its efforts to deal with issues raised by the globalization of drugs, medical devices, and foods.

This is a big deal.  In 2009, 300,000 foreign facilities in more than 150 countries exported $2 trillion worth of FDA-regulated products to the United States.

Given these numbers alone, the FDA has some challenges.

In 2011, one out of every six FDA-regulated food products in the U.S. came from abroad.  Imports of fresh fruits, vegeta­bles, coffee, tea, and cocoa have more than doubled since 2000.

As the report explains,

To deal with this problem, the FDA has opened offices in:

The FDA seems seriously concerned about its global initiatives and the safety problems posed by our globalized food supply.

The volume seems impossible to manage.  Let’s hope the FDA’s efforts do some good.

I’ve been collecting items on food safety for the last week or two. Here’s a roundup for a quiet Friday in July:

The paper’s editors think that use of antibiotics for these purposes is irresponsible:  Our view on food safety: To protect humans, curb antibiotic use in animals.

USDA and UC Davis investigators are still trying to figure out how the toxic E. coli O157:H7 got onto the spinach. Investigators did not find the bacteria on the spinach field itself, but they did find it in water, cattle, and cattle feces at a cattle crossing over a stream one mile away. Leading hypotheses: runoff from that stream or wild boar.

The investigators say the spinach outbreak of 2006 was the result of a combination of circumstances: “Everybody is starting to realize that maybe unusually heavy rainfall prior to planting could be an issue in terms of where water is routed.”

Dairy farming is moving into California’s Central Valley in a big way.  Runoff from those farms will not be sterile and growing vegetables along water routes may be risky.  Compost, anyone?

The chemical behind Kellogg’s cereal recall

Kellogg recalled 28 million packets of breakfast cereals last month because people reported funny smells and getting sick from something in the packaging.  At first, Kellogg would not say what the chemical contaminant might be.

Then it said the chemical is methylnaphthalene. Mothballs! (Are they still making mothballs?  Their smell is unforgettable)

Tom Philpott’s comments on Grist.com point out what’s really at stake: “And of course, the real scandal is what Kellogg’s is marketing to kids: a tarted-up slurry consisting mainly of sugar, corn products, partially hydrogenated oil, and food colorings. But that’s a whole different story.”

Salsa and guacamole are sources of foodborne illness

The CDC reports that salsa and guacamole are becoming more frequent sources of contaminants leading to illness.  CDC started collecting information on sources of outbreaks in 1973.  Its first outbreak due to salsa or guacamole occurred in 1984.  Since then, there have been 136 such outbreaks.  Restaurants and delis were responsible for 84%.  Between 1984 and 1997, salsa and guacamole outbreaks accounted for 1.5% of total foodborne outbreaks.  But the percentage rose to 3.9% from 1998 to 2008.

Moral: make your own!

China is taking creative steps to prevent melamine from getting into milk powder and infant formula.  To discourage fraudulent producers from boosting up the apparent level of protein in milk with melamine, it simply reduced the amount of protein required.

The latest on food irradiation

FoodSafetyNews.com presented a two-part series on food irradiation (part 1 and part 2), both of them quite favorable to the technology. As I discuss in my book, Safe Food, I don’t have any safety ojections to food irradiation, but I consider it a late-stage techno-fix for a problem that should never have occurred in the first place.

Nestlé does nutrition education in China

Nestlé (the corporation, not me) is moving its Healthy Kids Program to China, and intends to put the program into every country in which it operates by the end of 2011.

Nestlé believes that education is the single most powerful tool for ensuring that children understand the value of nutrition and physical activity to their health through the course of their lives. As a Council member of the Chinese Nutrition Society, Nestlé is indeed honoured to work together with the authorities and several other organizations to promote nutrition awareness and health education for the Chinese children.

Want to make some guesses about what this program will say about nutrition?  Note yesterday’s post.  Probiotics in juice drink straws, anyone?

One clue comes from that barge loaded with food products that Nestle is sending up the Amazon into the Brazilian outback: The vessel will carry 300 different goods including chocolate, yogurt, ice cream and juices.”