I still get asked all the time: “What is Food Studies?”

Leonard Barkan, Professor of English and Art, and my esteemed NYU colleague until he was seduced away by Princeton, directly answers that question in this book.

…food and drink can scarcely enter cultural discourse without forming either the center or the outer periphery of an argument.”  (p. 142)

Food, he insists, inserts itself into everything human.  The tension between its material (earthy) and metaphorical (symbolical) meanings makes food impossible to ignore.

Barkan reads for the food.  In doing so, he invents a new term,”fooding” (analagous to “queering” as an analytic technique), to explore and interpret art and literature.

This book does for food in art and literature what Sidney Mintz did for food and global politics in Sweetness and Power: The Place of Sugar in Modern History.  It should be right up there with Mintz’s book as a foundational text of Food Studies.

One, to which Barkan often refers, is of a mosaic now in the Vatican, “Unswept Floor,” which depicts the detritus of a sumptuous dinner party.   It’s material meaning?  Garbage.  “…the Unswept Floor is a monument to the possibilities of rendering edibles as art” (p. 33).  Its metaphorical meanings?  Take your pick: wealth; power; disgust; eat or be eaten; here today, gone tomorrow. [And see Digression below at **] The book’s them is illustrated with an etching from this painting of a bucolic scene titled “Pensent-ils au raisin?” The cigar in this case is not just a cigar; it fact, it’s scarcely a cigar at all.  With this image in front of us and the question, “Are they thinking about the grapes?” having been posed, we know the answer: Hell, no!  Who would think of food at a time like this?

Because he is reading for the food.

In this example, you might not pay attention to the old woman with a basket of eggs to the right of all the action in this painting by Titian. But sometimes—and this will continue to be a recurrent theme of this book—food places a demand on the viewer that it be read as the thing itself.  What is utterly distinctive about Titian’s egg seller is her extraordinary frontal position in the painting…For me, this is not so ambiguous, nor it is merely an implication…What Titian was offering on behalf of his employers was, along with the representation of a sacred scene, some very familiar nourishment.  (p. 93-94)

He reads for food in the Bible,

I would argue that the Bible, and the traditions of representation that follow from it, display an interest in eating and drinking that is more constant than might have been noticed, and furthermore that there are ways in which those instances, taken together, can be seen as systematic rather than merely accidental or marginal.  (p. 95)

Eating and drinking, along with the practices that make them possible, are not exclusively metaphors, of course.  The New Testament never lets us forget that hunger and thirst are real.  Miracles like the filling of the disciples’ nets with fish or the feeding of the five thousand or the four thousand out of a diminutive supply of loaves and fishes, not to mention the rather less solemn instance of producing wine in water jugs when the booze has run out during the wedding at Cana, are significant because the functions of gaining nourishment and experiencing commensality are eminently worthy of the divide efforts undertaken by the Son of God.  (p. 99)

You are interested in botanical science or the Columbian Exchange?  See what he says about depictions of fruit and vegetables  in early 16th Century Italian wall paintings.

The range of species is astonishing: five types of grains, five types of legumes, eight forms of nuts, seven forms of drupes, nineteen forms of berries, six varieties of apple, and four types of aggregate fruits…What is even more remarkable is that we are able to identify each of these species…Up to date, it turns out, in the most radical way, as is clear from the presence of several species from the New World, including multiple types of squash or gourds…and, most astonishing to inhabitants of the Western Hemisphere, zea mays…or corn on the cob.  As these representations appeared just over two decades from the date of Columbus’s first voyage, it seems that gastronomic news has traveled quite fast.  (p. 192)

The book shows many different representations of The Last Supper.  What were the artists trying to tell us about the relationship of the food on the table to Christian symbolism?

What kind of relation, then, might we postulate, in regard to food and wine, between the literal and the metaphorical?  There are, after all, seven sacraments, at least in the Catholic church.  None of them has undergone the wars of interpretation that the Eucharist has: that, I believes, is because it involves eating and drinking, because it consists of literal ingestion.  Once again, it’s the sign at the entrance to the gullet that reads, “The metaphor stops here.”  (p. 241.)

As for the literal and metaphorical meanings of the Eucharist itself?

Let us bring this discourse radically down to earth, from theology to experience and from medieval debate to twenty-first-century cyberspace,  One has only to google the question “Should I chew the host? To discover that hundreds, possibly thousands of Christians—mostly Catholics, it seems—have spent their time at the altar rail in a desperate state of uncertainty, not about the transcendental meaning of the sacrament or the precise reality of the real presence but about what they should be doing with their teeth and tongue.  The answer to this question (spoiler alert) is that   is to raise the question whether I am eating Jesus or eating dinner.  And the church is silent on this point.  (p. 246).

I could go on and on but everyone interested in Food Studies as a discipline, food in art, and anything having to do with food and culture will want to read this book—for its ideas, its gorgeousness, and for sheer pleasure.

I will never again ignore depictions of food in paintings or look at them in the same way.

**And here’s the digression: When I saw the photos of Unswept Floor, I thought immediately of the bronzed garbage embedded in the road at the site of Boston’s old Haymarket, which I just loved and went to admire  every time I went to Boston.  But the last time I looked for the pieces, they were gone.  I just looked it up—they will be resinstalled at some point—but the best part is that the entire installation was inspired by Unswept Floor, as described here. These are unusual, to say the least, and great fun.

For one thing, the authors do not take themselves too seriously: They like to be known as honey and bunny, lower case.

For another, they think of food primarily as a design object. Of vegetables cut into small cubes, for example, they say:

Whether the design of frozen vegetables into small cubes is simple, functional, appropriate for the product and timeless, and of greater or lesser practical use, cannt be answered withoiut an adequate reference system (value system, ideology).  From today’s perspective, the answer would probaly be negative even though there is undeniably a certain timelessness about the product.

They point out that specific shapes convey specific associations.

Food in the shape of a triangle is actually rather unusual: psychologically because it always has an acute angle pointing at the consumer; ergonomically (especially with small objects such as chocolates) because it fits poorly in the mouth; and technically because (industrially) triangles are not easy to produce, stack and package.  One exception is the Toblerone….

And they are very much into semiotic theories, which, they say, can illuminate our lives and help solve environmental problems.

The photographs are in black and white but give the idea of how honey and bunny use food and dining as design objects (the photos are bigger, better, and more colorful in the XL version).

If you like this sort of thing—and I most definitely do—this is a quirky book that encourages thinking about food in entirely different ways.

As to why it matters, let me quote from the introduction to the book by my NYU colleague Fabio Parasecoli:

What is important to me is nt so much elaboratig a univocal and final definition of food design, but rather understanding why we are even talking about food design, how and why it emerged, how it connects to the developments within design at large, and why it is emerging at this specific historical point in time.  There may not be any firm answers yet, but it is quite likely that food design is a manifestation of the overall growing interest in food and the acknowledgment of its centrality to huma life.

While waiting for the plague to end, here’s a food project for the week

This invitation comes from the Getty Museum in Los Angeles. The Sad-and-Useless website has been collecting examples.  Some have to do with food.  Here are a couple of examples. Now it’s your turn.  Have fun! 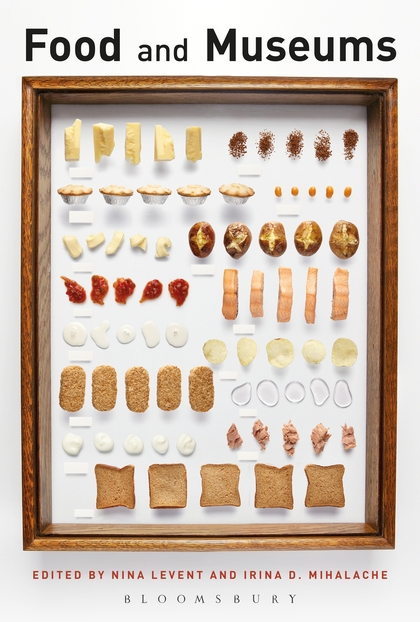 I love food collections in museums, the quirkier the better.  Happily for me, there are lots of them.

This book collects articles by various authors about their involvement with museum food collections all over the world.

I’ve seen some of the ones discussed here and even written about a couple of them.  I especially loved the collection of cup tops at the Smithsonian and the sugar cubes at Nestlé’s museum in Vevey.

The book organizes the articles into sections on interdisciplinary perspectives, collecting and exhibiting, engaging audiences, eating in museums, and food and art.

It does not seem to have anything on the spectacular food exhibit run in connection with the Milan Food Expo a few years ago—a disappointment.

But the articles are fun to read, make me wish I had been able to go to all the exhibits, and should inspire other museums to start collecting food objects.

Food politics: Mexico then and now

I’m in Mexico City doing talks for El Poder del Consumidor, the advocacy group in part responsible for Mexico’s soda tax.  I had some time to be a tourist yesterday afternoon and got to see the Diego Rivera murals at the Palacio Nacional.

These are enormous, and stunning.  They deal with the history of Mexico in conflict and in peace.  Look closely, and you see Rivera’s deep respect for Mexico’s traditional food culture.

Along the corridor flanking the main mural, for example, is a painting above a plaque listing what the world owes Mexico—corn, obviously—but also beans, tobacco (oops), chocolate, hemp, and tomatoes. Other panels also deal with corn—in this one, production. Another shows how corn is used. The corner panel at the end of the corridor is devoted to chocolate. Along the way, quieter panels display the harvest of fruits and vegetables. Leave the Palacio, cross the Zócolo, and you come to the Coca-Cola bar and toy store. A brief look at Mexico’s food culture, then and now.

See BonAppetit.com for explanation and identification.

Milan’s Trienniale Museum is offering an Arts & Foods exhibit in conjunction with the Food Expo.  Your Expo pass lets you in. I’ve been to many food-and-art exhibits, but this one is beyond enormous.  I seems to have everything. Food-related items—paintings, yes, but also teaspoons, coffee pots, refrigerators, and anything else you can think of that might have something to do with food—take up almost the entire museum.

The catalog is 4-inches thick, weighs at least 5 pounds, and costs 60 Euros.

But plan on many hours. the colossal sphinx is plastered with 35 tons of sugar, much of it on the floor by this time. At the behest of Creative Time Kara E. Walker has confected:

or the Marvelous Sugar Baby

The installation is open Friday to Sunday, free.  Details here.

A word of advice to Citibike users: Check the availability of docking stations before setting out.