The Coke “chairs” ad: Stand up for Coke!

I’m indebted to Yoni Freedhoff for posting Coca-Cola’s latest anti-obesity initiative, this one in Spain.

Will Chairs conquer the world?  Not if you stand up for Coke!

“What if we stand up?” is the message.  OK, this is not an absurd idea, in theory.  As Mal Nesheim and I review in our book Why Calories Count, plenty of evidence supports the health benefits of standing and fidgeting, rather than sitting.

But this ad comes from Coca-Cola, as part of its “4 commitments to fight overweight and sedentary lifestyle” campaign.

Why would Coke do this?  As BrandChannel says, “to get out ahead of the negative “sugary drinks” PR wave.”  It notes that Coke just signed a new bottling agreement in Spain, where it also launched “Happiness” ATMs as part of its global “ Open Happiness” campaign.

But in “Chairs,” gone is Coke’s role in promoting health. Sure, it’s meant to be funny but the substituted message is about how it’s the consumer’s fault for sitting down so much. Coke is implying that its a third, disintereted party and that consumers should take it up with their chairs (which, really, is another way of saying consumers should take it up with themselves).

The ad follows others run in the U.S. and in the U.K.

What I love best about the Spanish ad is that it could have come right out of The Onion.   Its writers argued that the ferocious opposition to Mayor Bloomberg’s 16-ounce soda plan proves that Americans are willing to stand up for their beliefs.

Dr. Freedhoff points out another irony: Coca-Cola is in the business of selling chairs (who knew?).

Two new books out on the same day, both looking at similar topics but from different angles, both well worth reading.  I did blurbs for both. 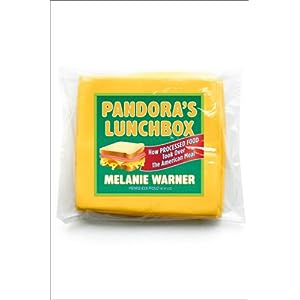 Warner used to cover the food business beat for the New York Times.  She knows what she’s talking about.

In Pandora’s Lunchbox, Melanie Warner has produced an engaging account of how today’s “food processing industrial complex” replaced real foods with the inventions of food science.  Her history of how this happened and who benefits from these inventions should be enough to inspire everyone to get back into the kitchen and start cooking.

And here is Warner in the weekend’s Wall Street Journal on the liquification of chicken nuggets (white slime, anyone?).

Moss wrote a Pulitzer Prize winning article for the New York Times on failures in our food safety system.  His article based on his new book appeared in Sunday’s New York Times Magazine.

Salt Sugar Fat is a breathtaking feat of reporting.  Michael Moss was able to get executives of the world’s largest food companies to admit that they have only one job—to maximize sales and profits—and to reveal how they deliberately entice customers by stuffing their products with salt, sugar, and fat.  Anyone reading this truly important book will understand why food corporations cannot be trusted to value health over profits and why all of us need to recognize and resist food marketing every time we grocery shop or vote.

And here’s the Wall Street Journal’s review of both (which is what happens when books on the same topic are published on the same day).

In case you missed all the publicity about Coca-Cola’s new ad campaign positioning the company as a force for public health, take a look at its new two-minute TV ad. The video—how much do these things cost?—argues that the company is producing lower-calorie products in smaller sizes and promoting community activity, that all calories count, and that it’s up to you to fit Coke into your healthy active lifestyle.

The ad is an astonishing act of chutzpah, explainable only as an act of desperation to do something about the company’s declining sales in the U.S. and elsewhere.

If Coke really wanted to help prevent obesity, it would STOP:

Instead, it’s doing all these things, but not talking about them in videos.

The company is supposed to be releasing a second video tonight, explaining how to work off the “140 happy calories” in a soda by dog-walking, dancing, or laughing. If only.

Addition, January 18:  Someone who calls himself John Pemberton has gone to the trouble of presenting the 2-minute commercial with a somewhat different narrative—the real story about Coca-Cola and obesity.  If that link doesn’t work, try this one.

I was unfamiliar with the Leanwashing Index, but am delighted to learn about it.  EnviroMedia launched it in 2012 to discourage advertisers from using absurdities to push products.

EnviroMedia explains the inspiration for the Index: the appearance of the word “Superfood” on Lake Superior State University’s 38th annual List of Words to be Banished.

Away with all of them!  (I can think of plenty more.  Send your suggestions to the site.)

And while we are on the subject of whole grains, you might want to take a look at Colbert’s latest “Thought for Food.”

Most of you probably don’t read the Journal of Public Health Policy, but I’m on its editorial committee.  Nevertheless, this editorial came as a surprise.*   I thought I would share it with you.  Enjoy!  (I did).

I first encountered Marion Nestle in the late 1990s when I edited Public Health Reports, the scientific journal of the US Public Health Service. We published a provocative piece of hers about the marketing by Proctor and Gamble of Olestra, a zero calorie fat substitute. Marion taught me a great deal about how the food industry markets its products that are tasty, convenient, and relatively inexpensive. It markets intensively to children and continues to do so long after overeating and obesity have been shown to have deadly health consequences. Sound familiar? Perhaps like the tobacco industry.

In 2003, I invited Marion to Public Health Grand Rounds to describe the obesity epidemic to my public health students at Tufts Medical School. To follow Marion, I invited Richard Daynard from Northeastern Law School, who had litigated extensively against the tobacco industry. Dick carefully noted the differences between tobacco, which has no healthy use, and food. But he suggested that the anti-health behavior of the two industries might be similar: continuing to market products in a way that certainly harmed health.

When the public health faculty at Tufts and the law faculty at Northeastern joined forces to establish the Public Health Advocacy Institute, one of our first projects was Legal Approaches to the Obesity Epidemic1, a symposium published in the Journal of Public Health Policy, in 2004. It attracted a great deal of attention and JPHP became a favorite place to publish research on obesity.

But I was not entirely pleased, because although the research was usually methodologically sound, it often missed Marion’s point and the focus of the PHAI symposium. Most submissions concentrated on individual behavior and personal responsibility. In 2010, I asked Marion, who was on the JPHP editorial board to join me in writing an Editorial: ‘Obesity as collateral damage: a call for papers on the Obesity Epidemic’.2 We had ‘come to believe that research studies concentrating on personal behavior and responsibility as causes of the obesity epidemic do little but offer cover to an industry seeking to downplay its own responsibility’. We urged ‘authors to submit articles that consider how to understand and change the behavior of the food industry’.

Imagine our pleasure in learning that starting this June, PLoS Medicine will publish a series of articles exploring the food industry’s involvement in health with Marion Nestle as a guest editor. To PLoS Medicine, we say bravo!

Olivier de Schutter, the United Nations Special Rapporteur on the Right to Food, has issued five recommendations for fixing diets and food systems:

One in seven people globally are undernourished, and many more suffer from the ‘hidden hunger’ of micronutrient deficiency, while 1.3 billion are overweight or obese.

Faced with this public health crisis, we continue to prescribe medical remedies: nutrition pills and early-life nutrition strategies for those lacking in calories; slimming pills, lifestyle advice and calorie counting for the overweight.

But we must tackle the systemic problems that generate poor nutrition in all its forms.

have often been indifferent to what kind of calories are on offer, at what price, to whom they are accessible, and how they are marketed…We have deferred to food companies the responsibility for ensuring that a good nutritional balance emerges.

…Heavy processing thrives in our global food system, and is a win-win for multinational agri-food companies…But for the people, it is a lose-lose…In better-off countries, the poorest population groups are most affected because foods high in fats, sugar and salt are often cheaper than healthy diets as a result of misguided subsidies whose health impacts have been wholly ignored.

Much to ponder here.  Let’s hope government health agencies listen hard and get to work.

For further information, the press release adds these links:

I am indebted to FoodNavigator.com for bringing the recent ads for Dr Pepper Snapple’s diet—oops, low-calorie—Dr Pepper Ten to my attention.

This drink has only 10 calories but is aimed clearly at men who, the ads assume, are fine about low-calorie sodas but squirm at the idea that they might be seen drinking diet sodas.

In case you haven’t been tracking these things, Coke has both bases covered: Diet Coke appeals to women and Coke Zero appeals to men.

FoodNavigator’s Caroline Scott-Thomas is devastating in her critique of this strategy.  The “it’s not for women” campaign excludes half the market.

Not only that, she says, but the ad is:

patronizing to both men and women in its reinforcement of what I had (perhaps naively) hoped were outdated stereotypes….It deliberately picks at the edges of our comfort zones.  Is it OK to be sexist if it’s done with irony?…Provocation is a blunt instrument.  It may prove effective for sales—perhaps as effective as sexually explicit marketing—but it is still crude and obtuse.”

Finally, she asks: “Would this ad be offensive if it involved a bunch of redneck clichés and proclaimed ‘it’s not for blacks’?  You bet it would.”

In this era of food overabundance, marketers will do anything—anything—to sell products.  Water, anyone?

A study published online in the American Journal of Public Health fiddled around with red (avoid) and green (eat me) labels on items in a hospital cafeteria.

The investigators measured sales before the start of the intervention.  About a quarter of items sold were in the red category and 42% were green—these hospital workers were already making healthy choices.

The intervention took place in two 3-month phases.  The first phase just involved traffic light labels.  In the second phase, the investigators moved the items around to make the green-labeled products more visible and accessible.

For example, sales of red-labeled drinks decreased by 16.5%.  When the drinks were made less accessible, sales declined by an additional 11.4% (sales of bottled water increased).

No wonder the food industry in Great Britain fought so hard against traffic light front-of-package labeling.  No wonder the Grocery Manufacturers Association and Food Marketing Institute much prefer their own guaranteed-not-to-work system.

And data like these surely explain why the FDA is taking so long to do anything with the Institute of Medicine’s proposed labeling system—not exactly traffic lights, but pretty close.

This study provides further evidence for the value of such schemes for helping people make healthier choices.